In Defense of Wilhelm Reich: Opposing the 80-Years' War of Mainstream Defamatory Slander Against One of the 20th Century's Most Brilliant Physician (Paperback) 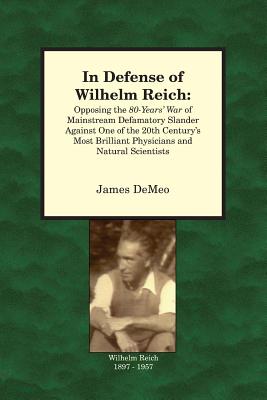 From the "Introduction" Dr. Wilhelm Reich is the man whom nearly everyone loves to hate. No other figure in 20th Century science and medicine could be named who has been so badly maligned in popular media, scientific and medical circles, or so shabbily mistreated by power-drunk federal agencies and arrogant judges. Publicly denounced and slandered in both Europe and America by Nazis, Communists and psychoanalysts, placed on both Hitler's and Stalin's death lists but narrowly escaping to the USA, subjected to new public slanders and attacks by American journalists and psychiatrists who deliberately lied and provoked an "investigation" by the US Food and Drug Administration (FDA), imprisoned by American courts which ignored his legal writs and pleas about prosecutorial and FDA fraud, denied appeals all the way up to the US Supreme Court, which rubber-stamped the FDA's demands for the banning and burning of his scientific books and research journals, and finally dying alone in prison - who was this man, Wilhelm Reich, and why today, some 50 years after his death, does he continue to stir up such emotional antipathy? It is a literal 80-Years' War of continuing misrepresentation, slander and defamation. Who were and are Reich's attackers? And what stands behind their obsession to utterly rid the world of him, and of his work? What are the facts regarding Reich's social-sexual theories and his experimental work on the orgone energy, or life-energy? Natural scientist and former professor James DeMeo takes on the book-burners, exposing with clarity and documentation their many slanderous fabrications, half-truths and lies of omission. In so doing, he also summarizes the lesser-known facts about Reich's important clinical and life-energetic experimental findings, now verified by scientists and physicians in Europe, the Americas and other nations, which hold great promise for the future.