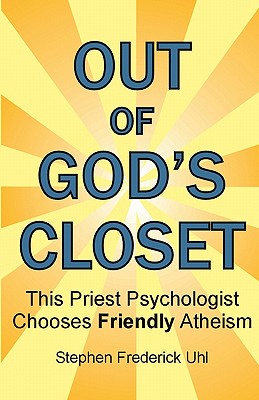 This book could have been titled The Book of Tolerance. The Psychologist author recognizes that every child learns a lot of traditions and beliefs when too young to evaluate them. Such prejudices are very deeply ingrained into the subconscious. They are difficult to overcome even in our adult years of further experience and education. (Dr. Uhl was already in his 30s when he finally got free; many people never get free.) Each person grows up and learns to analyze and think criticallly at different rates. Even in the same family one sibling may remain opinionated and prejudiced, stuck in the past, while another thoughtfully unlearns childhood myths and becomes a broadminded adult ready for planetary friendships. Therefore, tolerance of such differing rates of learning and unlearning is necessary for civilized peace in a pluralistic society. Such friendly understanding comes easy under the new Golden Rule: Treat others as you would reasonably want and expect to be treated if your roles were reversed. Out of God's Closet: This Priest Psychologist Chooses Friendly Atheism shows how the author got really free and how readers can enjoy the same freedom to be proud, happy, planetary neighbors. Generous sprinkling of earthy humor richly seasons this revolutionary book for enjoyable spiritual nourishment.

STEPHEN UHL, Ph.D. Doctor Stephen Uhl was a Benedictine monk for 17 years and a Roman Catholic priest for 11 years before becoming a psychologist. He had been destined by his mother to become a priest. After years of sincere and devoted priestly service, deep meditation, extensive consultation and a near-fatal accident, he discovered that he no longer believed the church teachings. So, to be true to himself and to the great chagrin of his large Catholic family, he left the monastery, the church and the priesthood. Dr. Uhl earned his Ph.D. at Loyola University of Chicago. He enjoyed a thriving private practice of psychology. It was during the productive years in his psychologist's office that he more deeply and more practically realized the very destructive effects of guilt. Seeing that so much guilt was based in superstition and faulty religious beliefs, he recently wrote the exciting and insightful little book, Out of God's Closet: This Priest Chooses Friendly Atheism. Dr. Uhl's broad and deep academic background equips him well to deal with the most important building blocks of human happiness. Before earning the Ph.D. in psychology, he earned the license to teach theology in pontifical universities, achieved a masters degree in the teaching of mathematics, and was licensed as a parent and teacher effectiveness trainer. During his years of psychological practice, he attained membership in The American Psychological Association, American Orthopsychiatric Association, and American Society of Clinical Hypnosis. He became a Preferred Provider of General Psychological Services, Washington, D.C., was admitted as a Fellow in The American Orthopsychiatric Association, and in 1992 was admitted to Who's Who Among Human Services Professionals. All this rich academic background, coupled with the common sense of a farmer's son and a great sense of humor, contributes richly to his little book, Out of God's Closet. Reviewers have called it the work of genius, simple and profound, easy to read, deeply insightful and outrageously funny. The book reflects the author's journey from superstition to the joyful practice of a modified Golden Rule while showing other doubters of "eternal truths of childhood" how to enjoy a rich and friendly planetary life without guilt.