Rama and the Early Avatars of Vishnu: Plus Ramayana Abridged (Paperback) 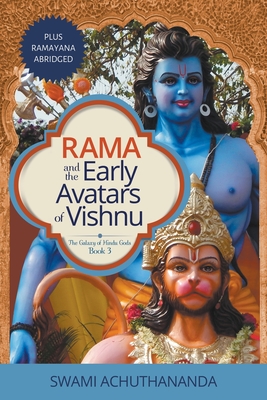 As the protector god, Vishnu is often depicted as sleeping blissfully on an ocean of milk. But that's a deceptive image. Duty-bound, Vishnu is always vigilant and descends into the world in one of his avatar forms whenever humanity is threatened by evil or chaos. The Dashavataras are Vishnu's top-ten incarnations to destroy evil and establish righteousness.
In the third volume of the series, The Galaxy of Hindu Gods, we begin the avatar saga by exploring the tales and legends connected with each incarnation. We introduce you to Prahlada, whose story offers a shining example of the extent to which Vishnu would go to protect his devotees. The story of Bali shows how a generous king is dispatched to the netherworld for being too ambitious. Although this may seem unfair, Vishnu makes amends by bestowing on Bali the gift of longevity. The axe-wielding Parashurama embarks on a mission to exterminate the warrior caste from the face of Earth--and largely succeeds until he bumps into another avatar of Vishnu.
The highlight of this volume is Rama, the protagonist of the Ramayana and a name that is synonymous with dharma (religious duty). Rama fought the ten-headed King of Lanka and defeated him in his own hometown, but it seems Rama waged a bigger battle with the dictates of dharma--and lost. In this book you meet the monkey-faced Hanuman for the first time. The quintessential devotee, Hanuman is associated with Rama and highly revered among Hindus. Also in the Ramayana we encounter one of the greatest villains of Hindu mythology--the mighty Ravana. Even though Ravana abducted Rama's beloved wife, you will be surprised to know that not everyone regards Ravana as an antihero. Was Ravana really a bad guy? Did Rama go overboard with dharma and neglect his family? At the end of the Ramayana, we are left with many thought-provoking questions that are debated even today.