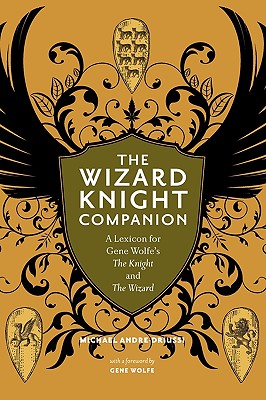 By Michael Andre-Driussi, Gene Wolfe (Foreword by)
$9.95
Email or call for price.

THE WIZARD KNIGHT COMPANION (paperback edition) is a brief alphabetical dictionary for Gene Wolfe's two-volume THE WIZARD KNIGHT series. Its entries identify the characters in the novel, dive into the mysteries in the text, and explore the Norse, Celtic, and Arthurian sources for names and words in the novels. It includes a map of the region, a cosmology, and a synopsis of the narrative. Nominated for a World Fantasy Award, THE WIZARD KNIGHT has received high accolades from critics and fans. Many reviews highlight its rich use of European mythology; many also comment on its puzzles and mysteries. In a starred review, Booklist calls the series "a complex, even convoluted tale, with so many characters and subplots that a proper summary would far exceed the limits of a Booklist review. . . . There is hardly a piece of northern European heroic literature from which Wolfe doesn't borrow with his usual scholarly flair and in his exquisitely turned prose. . . . Arising from the same sources as Lord of the Rings, THE WIZARD KNIGHT is one of the few fantasies that can justly be compared with it." Kirkus Reviews mentions that "Wolfe likes to spin spiderwebs of plot and counterplot inside his impressively constructed universe." In The Washington Post, Bill Sheehan calls THE WIZARD "a satisfying, wide-ranging novel that contains enough marvels and mysteries (not all of which are resolved or explained) to populate an entire series." Marvels and mysteries, subplots and spiderwebs? If you love THE WIZARD KNIGHT and wish to enjoy it even more, THE WIZARD KNIGHT COMPANION is your perfect guidebook. ABOUT THE AUTHOR: Michael Andre-Driussi is the author of LEXICON URTHUS: A DICTIONARY FOR THE URTH CYCLE (1994; second edition 2008). His writings on Gene Wolfe include "Gene Wolfe: The Man and His Work" (The Magazine of Fantasy & Science Fiction); and "Gene Wolfe at the Lake of Birds" (Foundation). He is also coeditor, with Alice K. Turner, of Snake's-Hands: The Fiction of John Crowley. His recent fiction includes "Old Flames in New Bottles" (ParaSpheres).