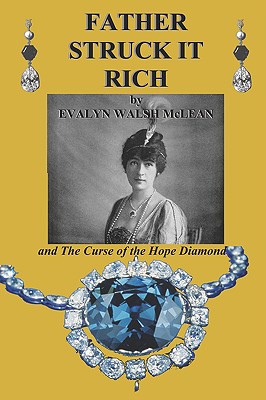 The Greatest True Cinderella Story Ever Told This is the true story of a poor, little girl whose father was prospecting for gold. When her father found gold, she suddenly became one of the richest women in the world. Her family moved to Washington DC where kings and princes came calling on her asking her for favors. Her father built for her the biggest private mansion in the world. When she got married, she bought herself a famous diamond. She was told before she bought it that it was stolen from the eye of a Hindu God, and that there was a curse upon it, but she did not believe it. She believed that it would bring her good luck. Here is what happened to her and it is all absolutely true. Did the misfortunes befall her because of bad luck, or was it because of The Curse? Evalyn Walsh McLean (1886-1947) was an American mining heiress and socialite who was famous for being the last private owner of the 45-carat Hope Diamond as well as another famous diamond, the 94-carat Star of the East. She was the only daughter of Thomas Walsh, an Irish immigrant miner and prospector turned multimillionaire. In 1908, she married Edward Beale McLean, the heir to the Washington Post and Cincinnati Enquirer publishing fortune. The couple's notoriety is reflected by their appearance in Cole Porter's title song to the 1934 musical, Anything Goes: "When Missus Ned McLean (God bless her) Can get Russian reds to "yes" her, Then I suppose Anything goes." Evalyn Walsh McLean was also a friend and confidante to Alice Roosevelt Longworth and Florence Harding, the wife of Warren G. Harding, the 29th President of the United States.