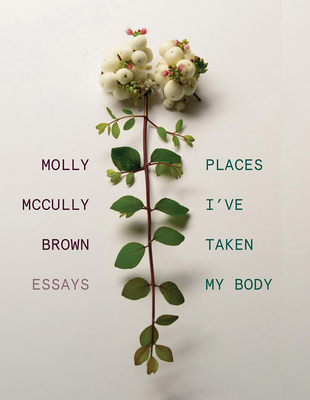 Indispensable essays on the body, mind, and spirit by Molly McCully Brown, author of the acclaimed poetry collection, The Virginia State Colony for Epileptics and Feebleminded, a book the New York Times described as “part history lesson, part séance, part ode to dread. It arrives as if clutching a spray of dead flowers. It is beautiful and devastating.”

In seventeen intimate essays, poet Molly McCully Brown explores living within and beyond the limits of a body—in her case, one shaped since birth by cerebral palsy, a permanent and often painful movement disorder.  In spite of—indeed, in response to—physical constraints, Brown leads a peripatetic life: the essays comprise a vivid travelogue set throughout the United States and Europe, ranging from the rural American South of her childhood to the cobblestoned streets of Bologna, Italy. Moving between these locales and others, Brown constellates the subjects that define her inside and out: a disabled and conspicuous body, a religious conversion, a missing twin, a life in poetry. As she does, she depicts vividly for us not only her own life but a striking array of sites and topics, among them Mary Shelley’s Frankenstein and the world’s oldest anatomical theater, the American Eugenics movement, and Jerry Falwell’s Liberty University. Throughout, Brown offers us the gift of her exquisite sentences, woven together in consideration, always, of what it means to be human—flawed, potent, feeling.

Molly McCully Brown received her MFA from the University of Mississippi, and is a graduate of Stanford University and Simon’s Rock of Bard College. She has published poems in Gulf Coast, Image, Kenyon Review, and elsewhere.

Brown
eloquently, often wittily describes a mostly wheelchair-bound life
lived with pain and the places, emotional and physical, to which she has
traveled. [Her identical twin] Frances died [in] less than two
days . . . and Brown was stricken with cerebral palsy. . . . Memories of
her dead sister haunt every page of this powerful book, as does the
ominous ticking of her lifetime survival-rate clock. . . .Brown is a
writer to watch. . . .Heartfelt and wrenching.
— Kirkus Reviews (Starred)

Poet Brown (The Virginia State Colony for Epileptics and Feebleminded) explores living with cerebral palsy in her fine prose debut … Brown’s work leaves readers with a lyrical look at living within the confines of the body.

...searing and ineffable... Brown's essays can feel like a punch in the gut, but they are beautiful, nevertheless.
— Booklist (Starred)

I
want to press this book into the hands of everyone I know. Writing from
the locus of her own constantly changing, often intractable body, Molly
McCully Brown captures the fullness of the human experience — desire,
loss, flesh, faith, poetry, place, memory — with lyric compression and
expansive grace. Reading these exquisite essays made me want to get out
and do something with my own body — kneel at an altar and recite
the Hail Mary, stub out a cigarette in Bologna, stand on a hilltop and
shout expletives at the Trump administration. Which is to say, these are
urgent, compelling essays that remind us how to be fully alive inside
our own bodies, wherever we take them.
— Jamie Quatro, author of "Fire Sermon" and "I Want to Show You More"

These remarkable essays invite us to look long and hard at our own
interior landscapes, and to negotiate exterior ones with as much grace
and gratitude as we can muster.
— Eliza Griswold, author of "Amity & Prosperity," winner of the Pulitzer Prize