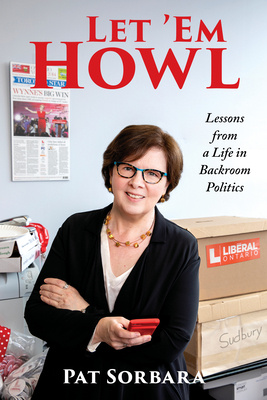 Patricia Sorbara has been a political operative for more than forty years--a mainstay in the background of both federal and provincial politics in Ontario, dedicating her career to the Liberal Party. She's worked for and with Liberal Opposition Leaders, Premiers, Members of Parliament, Members of Provincial Parliament and more candidates than any staffer could imagine. Sorbara became known as the woman to have on side, the one who knows the ground game and never backs down from a challenge. In December of 2014, all of that changed. A potential candidate in Sudbury, ON, went to the media with the allegation that Sorbara, acting on behalf of the Party, had offered a bribe in exchange for stepping down from a nomination race. She was blindsided.

While on trial in Sudbury in the fall of 2017, Sorbara found herself leaning on the unique education of decades in politics, one that came with being a lifelong female political staffer, which saw her through the first emotional moments of the trial to the eventual verdict nearly seven weeks later. But it didn't end there. In Let 'Em Howl: Lessons from a Life in Backroom Politics, Sorbara shares her best lessons from the back room--the ones that sustained her in the darkest hours--illustrated by stories featuring key political figures in Canadian politics. The result is required reading for anyone interested in Canadian politics or government.