The Making of Holy Russia: The Orthodox Church and Russian Nationalism Before the Revolution (Paperback) 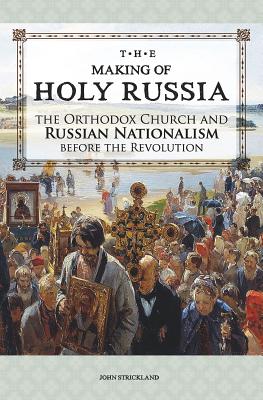 By John Strickland
$28.95
Email or call for price.

This book is a critical study of the interaction between the Russian Church and society in the late 19th and early 20th century. While other studies exist that draw attention to the voices in the Church typified as liberal in the years leading up to the Revolution, this work introduces a wide range of conservative opinion that equally strove for spiritual renewal and the spread of the Gospel. Grounded in original research conducted in the newly accessible libraries and archives of post-Soviet Russia, this study is intended to reveal the wider relevance of its topic to an ongoing discussion of the relationship between national or ethnic identities on the one hand, and the self-understanding of Orthodox Christianity as a universal and transformative faith on the other.

John Strickland is an Archpriest in the Diocese of the West, the Orthodox Church of America in the western United States, and an associate professor of history at Saint Katherine College. He lives in Valley Center, California.

"Most compellingly, perhaps, Strickland demonstrates that for Orthodox patriots, the model of 'Holy Rus' was 'neither a 'myth' (Cherniavsky) nor ‘reactionary utopia' (Zyrianov),' but, rather, the inspiration for a multifaceted mission to 'transfigure' Russia's increasingly secular culture into a religious one (p. 53)." —Paige Herrlinger, the Russian Review

"There is much to recommend this volume. As an Orthodox archpriest, Strickland pays more attention than most scholars to theological issues, invoking the ecclesiological, eschatological, and pneumatological foundations of Orthodox patriotism." —Paul W. Werth, Slavic Review