Heart Steps: Prayers and Declarations for a Creative Life (Paperback) 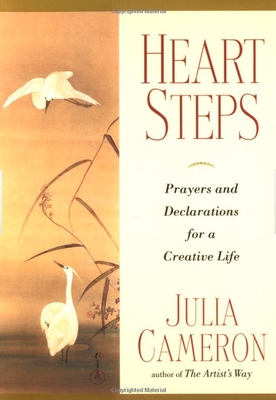 In this gift-size book, Cameron shares beautiful prayers of empowerment followed by potent declarations on the nature of creativity that extend beyond affirmations to facilitate a powerful awakening of the artistic child within and revitalize fading dreams, while lending encouragement and compelling reminders that we can all tap into the creative spirit. Heart Steps is certain to ignite the creative spark, drawing readers inward toward the fire of their own creativity. Whether read in one sitting or savored over time, Heart Steps is a book no creative being will want to be without. Index.

Julia Cameron has been an active artist for more than three decades. She is the author of more than thirty books, including such bestselling works on the creative process as The Artist’s Way, Walking in This World, and Finding Water. Also a novelist, playwright, songwriter, and poet, she has multiple credits in theater, film, and television, including an episode of Miami Vice, which featured Miles Davis, and Elvis and the Beauty Queen, which starred Don Johnson. She was a writer on such movies as Taxi Driver, New York, New York, and The Last Waltz. She wrote, produced, and directed the award-winning independent feature film God's Will, which premiered at the Chicago International Film Festival, and was selected by the London Film Festival, the Munich International Film Festival, and the Women in Film Festival, among others. In addition to making films, Cameron has taught film at such diverse places as Chicago Filmmakers, Northwestern University, and Columbia College. She is also an award-winning playwright, whose work has appeared on such well-known stages as the McCarter Theater at Princeton University and the Denver Center for the Performing Arts.