Out of Sheer Rage: Wrestling with D. H. Lawrence (Paperback) 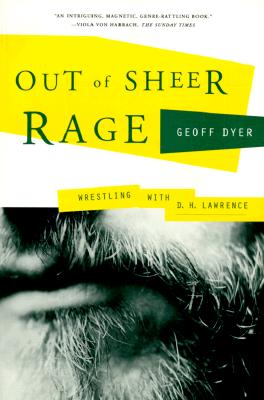 Geoff Dyer had always wanted to write a book about D. H. Lawrence. He wanted, in fact, to write his "Lawrence book." The problem was, he had no idea what his "Lawrence book" would be, though he was determined to write a "sober academic study." Luckily for the reader, he failed miserably.Out of Sheer Rage is a harrowing, comic, and grand act of literary deferral. At times a furious repudiation of the act of writing itself, this is not so much a book about Lawrence as a book about writing a book about Lawrence. As Lawrence wrote about his own study of Thomas Hardy, "It will be about anything but Thomas Hardy, I am afraid-queer stuff-but not bad."

Geoff Dyer is the author of six books including "Paris Trance" and "But Beautiful: A Book about Jazz." He lives in England.

"A potently distilled treatise on literature." --The New Yorker

"In the spirit of Julian Barnes's Flaubert's Parrot and Alain de Botton's How Proust Can Change Your Life, Mr. Dyer's Out of Sheer Rage keeps circling its subject in widening loops and then darting at it when you least expect it to . . . a wild book." --Christopher Lehmann-Haupt, The New York Times

"His brand of imaginative criticism illuminates a direction where literary criticism might go. If only we could have more fresh, insightful, energetic works such as Dyer's." --Jenifer Berman, Bomb magazine