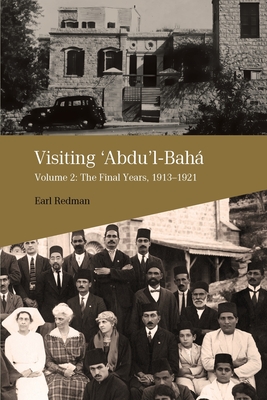 This book concludes Earl Redman's trilogy about 'Abdu'l-Bah as seen through the eyes of the pilgrims and other visitors to 'Akk and Haifa and those who met Him in Europe and America. While Volume 1 of Visiting 'Abdu'l-Bah covered the years from 1897 to 1911, 'Abdu'l-Bah 's travels between 1910 and 1913 are described in 'Abdu'l-Bah in Their Midst. This volume begins with the Master's return to Haifa in 1913 and ends with His passing in 1921.

As in volume 1, this book is based largely on the notes of pilgrims and others who visited the Master in the Holy Land. As such, they must be viewed simply as personal impressions, but impressions 'of a most precious character'. Those who had the privilege of meeting 'Abdu'l-Bah carried these impressions with them until the end of their lives, and their pen-pictures have become an inspiration to many, both believers and the general public, in the century since His passing.

Most of us here have, I think, a clear picture of . . . his dignified figure walking thoughtfully in our streets, of his courteous and gracious manner, of his kindness, of his love for little children and flowers, of his generosity and care for the poor and suffering. So gentle was he, and so simple that, in his presence, one almost forgot that he was also a great teacher and that his writings and his conversations have been a solace and an inspiration to hundreds and thousands of people in the East and in the West. The Governor of Phoenicia, January 1922