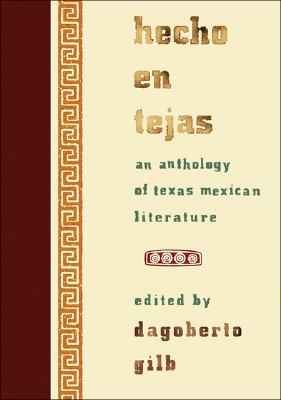 By Dagoberto Gilb (Editor)
Email or call for price.

Once an independent nation, Texas has always been proud of its unique culture. The literature of the Lone Star State has long attracted local, regional, and national audiences and critics, yet the state's Mexican American voices have yet to receive the attention they deserve.

Hecho en Tejas is a historic anthology that establishes the canon of Mexican American literature in Texas. With close to one hundred selections chosen, the book reaches back to the sixteenth-century exploration narrative of Texas's first Spanish-speaking writer, Alvar Nu ez Cabeza de Vaca. It features prose by Am rico Paredes and Jovita Gonzalez, Rolando Hinojosa and Tom's Rivera, Estela Trambley Portillo, and Sandra Cisneros. Among the poets included in the anthology are Ricardo S nchez, Carmen Tafolla, Angela de Hoyos, and Abelardo Lalo Delgado. Hecho en Tejas also includes corridos from the turn of the century and verses sung by music legends such as Lydia Mendoza and Santiago Jimenez, Sr., Freddy Fender, and Selena. In addition to these established names, already known across the United States, Hecho en Tejas introduces such younger writers as Christine Granados, Erasmo Guerra, and Tonantzin Canestaro-Garcia, the famous Tejano authors of tomorrow.

In assembling this canonic reader, Dagoberto Gilb has created more than an anthology. Read cover to cover, Hecho en Tejas becomes not only a literary showcase, but also a cultural and historical narrative both for those familiar with Texas Mexicans and for outsiders. Hecho en Tejas is a mosaic portrait of the community, the land and its history, its people's sorrows and joys, anger and humor and pride, what has been assimilated and what will not be.