The Pursuit of Happiness in the Founding Era: An Intellectual History (Studies in Constitutional Democracy) (Paperback) 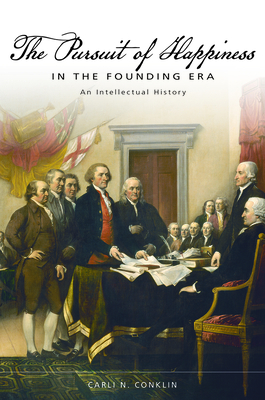 Scholars have long debated the meaning of the pursuit of happiness, yet have tended to define it narrowly, focusing on a single intellectual tradition, and on the use of the term within a single text, the Declaration of Independence. In this insightful volume, Carli Conklin considers the pursuit of happiness across a variety of intellectual traditions, and explores its usage in two key legal texts of the Founding Era, the Declaration and William Blackstone’s Commentaries on the Laws of England.

For Blackstone, the pursuit of happiness was a science of jurisprudence, by which his students could know, and then rightly apply, the first principles of the Common Law. For the founders, the pursuit of happiness was the individual right to pursue a life lived in harmony with the law of nature and a public duty to govern in accordance with that law. Both applications suggest we consider anew how the phrase, and its underlying legal philosophies, were understood in the founding era. With this work, Conklin makes important contributions to the fields of early American intellectual and legal history.

Carli N. Conklin is Associate Professor at the University of Missouri School of Law. She lives in central Missouri.

“Professor Conklin is one of those exceedingly rare and invaluable scholars who unites in a single analysis of the founders’ thought the four traditions that most influenced them—the classical heritage, Christianity, the English legal tradition, and the Scottish Enlightenment—rather than advocate for the primacy of a single heritage. She presents a cogent argument that the glue that held these diverse influences together was their shared conception of ‘the pursuit of happiness.’”—Carl Richard, University of Louisiana at Lafayette, author of The Battle for the American Mind: A Brief History of a Nation’s Thought

“Carli Conklin's study is an original, significant, and well-documented contextualization of ‘the pursuit of happiness’ in the main currents of eighteenth-century British and American legal and political thought, philosophy, and religious thought.  It is an important contribution to eighteenth-century intellectual history.”—Alan Charles Kors, University of Pennsylvania, author of Naturalism and Unbelief in France, 1650-1729 and Epicureans and Atheists in France, 1650-1729

"This is the first full-scale effort to understand the founding-era meaning of the phrase 'pursuit of happiness' in the Declaration of Independence. Through a careful analysis of contemporary sources, Carli Conklin demonstrates that the phrase was not simply a placeholder for a right of property, or a rhetorical device without clear substantive content. Instead it was an encapsulation of the view that 'happiness' for humans came from a combination of an appreciation of the natural world and a recognition of the place of human agency within it."—G. Edward White, David and Mary Harrison Distinguished Professor of Law, University of Virginia, author of Law in American History, Volume 1: From the Colonial Years Through the Civil War

“Addresses a perennial question in the scholarly literature as to why Jefferson, in the Declaration of Independence, substituted ‘pursuit of happiness’ for Locke’s ‘property’ in its listing of natural rights.”—Garrett Sheldon, University of Virginia’s College at Wise, author of The Political Philosophy of James Madison and The Political Philosophy of Thomas Jefferson

"Conklin offers a deep and rich analysis that persuasively demonstrates that the pursuit of happiness was far more than a substitute for property. Ultimately, she concludes, the contemporaneous understanding of happiness encompassed a multi-layered array of legal, religious, and philosophical constructs that, properly discerned and appreciated, provide the appropriate cultural context for understanding Jefferson’s choice of words. ... Conklin’s nuanced treatment makes an important contribution to an evolving cross-disciplinary conversation. It deserves a broad audience."—Choice

"By tracing these constitutive threads of the Declaration’s meaning, Conklin has provided invaluable tools for further interpretation of its enigmatic and perpetually contested phraseology."—Political Science Quarterly