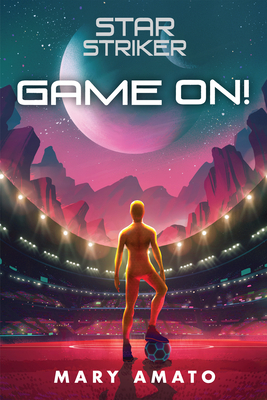 Join Albert and a group of ragtag aliens as they dribble, cross, and score across the galaxy in this soccer-themed story of unlikely friendships.

The day that aliens abducted 13-year-old Albert Kinney was the day he was hoping to make the school soccer team.But that's the way life works sometimes, especially for Albert.

Astonishingly the Zeenods, don't want to harm Albert, they want him to play soccer. And so, Albert jumps at the chance to join the Zeenods. Yet just as he is introduced to the specifics of their game and all their high-tech gear, he faces a series of direct threats to his life. Does someone have a mysterious vendetta against Albert? Or does their first opponent, the ruthless team from Planet Tev, want to guarantee that they win?

Action-packed, yet filled with humor and heart, Game On! is the first book in a series that features thrilling play-by-play soccer scenes and an intergalactic plot with far-reaching consequences for the Zeenods--and Earth.

Mary Amato writes fiction for children, such as the hilarious Riot Brothers series, but she is also a singer-songwriter who performs in the Washington, D.C. area. In addition, she is a co-founder of Firefly Shadow Theater, a puppet company for which she writes and directs shows. Her novels have appeared on children's choice state award lists around the country. She lives in Hyattsville, Maryland.

"This first book in a forthcoming intergalactic sports series will surely please science fiction readers. The writing is descriptive and elaborate without being burdensome. The characters are relatable and well developed with relationship issues and familiar family dynamics."—School Library Journal

"Readers will instantly connect with Albert and his struggles at home, school, and with the sport he loves."—Kirkus Reviews