Breathing Race into the Machine: The Surprising Career of the Spirometer from Plantation to Genetics (Hardcover) 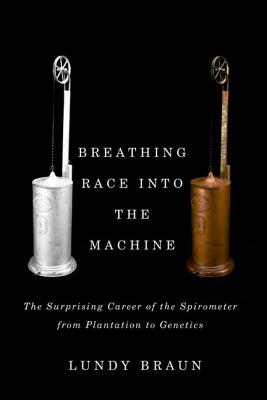 How race became embedded in a medical instrument

In the antebellum South, plantation physicians used a new medical device—the spirometer—to show that lung volume and therefore vital capacity were supposedly less in black slaves than in white citizens. At the end of the Civil War, a large study of racial difference employing the spirometer appeared to confirm the finding, which was then applied to argue that slaves were unfit for freedom. What is astonishing is that this example of racial thinking is anything but a historical relic.

In Breathing Race into the Machine, science studies scholar Lundy Braun traces the little-known history of the spirometer to reveal the social and scientific processes by which medical instruments have worked to naturalize racial and ethnic differences, from Victorian Britain to today. Routinely a factor in clinical diagnoses, preemployment physicals, and disability estimates, spirometers are often “race corrected,” typically reducing normal values for African Americans by 15 percent.

An unsettling account of the pernicious effects of racial thinking that divides people along genetic lines, Breathing Race into the Machine helps us understand how race enters into science and shapes medical research and practice.

Lundy Braun is Royce Family Professor in Teaching Excellence, professor of medical science and Africana studies, and a member of the Science and Technology Studies Program at Brown University.

"Breathing Race into the Machine brilliantly tracks the remarkable story—lasting to the present—of how ‘correcting for race’ in measures of lung capacity became unremarkable scientific practice. This eye-opening account demonstrates that precision technologies and statistical techniques that supposedly measure biological differences accurately can mask racial myths and wreak devastating consequences for black people’s health and legal rights. Essential reading for everyone concerned about the impact of race on science and technology."—Dorothy Roberts, University of Pennsylvania, author of Fatal Invention: How Science, Politics, and Big Business Re-create Race in the Twenty-first Century

"Lundy Braun illuminates how the development of a new machine to measure lung capacity could begin with a benign purpose to assess the impact of working conditions in the coal mines in the early 19th century, but would later ‘morph’ into a justification for the putative relationship between difference and hierarchy that has remained intact for nearly two centuries. Braun documents how the social, economic and political fabric of each period is interwoven into the science of measurement—a theme that deftly carries throughout the book, and will establish Breathing Race into the Machine as a landmark contribution to the social studies of science."—Troy Duster, author of Backdoor to Eugenics

"In Breathing Race into the Machine, Lundy Braun powerfully reinvigorates our understanding of how racial formation happens. An incisive, considered study of a seemingly conventional physiology instrument, this book reveals science as a foundational feature of the social construction of race. We create our own difference engines, but Braun’s astute book reminds us that we do not have to remain captive to them."—Alondra Nelson, author of Body and Soul: The Black Panther Party and the Fight against Medical Discrimination

"Great value to those with an interest in the history of science and technology, occupational health and disease, and the construction of whiteness and blackness."—Social History of Medicine

"This book reminds us that tools have a history and that their history matters."—Journal of American History

"Lundy Braun provides her readers with the most meticulously detailed, and I should add sophisticated, historical analysis. . . her account of the career of the technical device of the spirometer offers surprising and valuable insights."—Science as Culture

"Breathing Race into the Machine is theoretically informed, well researched, and well written. Its compelling account contributes to the scholarship of racialization in science and medicine."—ISIS