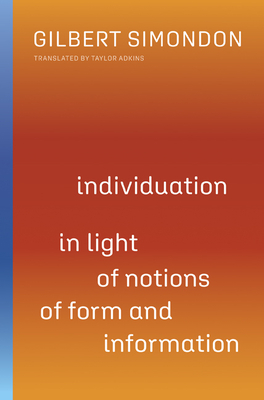 By Gilbert Simondon, Taylor Adkins (Translated by)
Email or call for price.

This is book number 1 in the Posthumanities series.

A long-awaited translation on the philosophical relation between technology, the individual, and milieu of the living

From Democritus’s atomism to Heisenberg’s uncertainty principle, from Aristotle’s reflections on the individual to Husserl’s call for a focused return to things, from the philosophical advent of the Cartesian ego and the Leibnizian monad to Heidegger’s notion of Dasein, the question concerning the constitution of the individual has continued to loom large over the preoccupations of philosophers and scholars of scientific disciplines for thousands of years.

Through conceptions in modern scientific areas of research such as thermodynamics, the fabrication of technical objects, gestalt theory, cybernetics, and the dynamic formation at work in the creation of crystals, Gilbert Simondon’s unique multifaceted philosophical and scholarly research will eventually lead to an astounding reevaluation and questioning of the historical methods for posing the very question and notion of the individual. More than fifty years after its original publication in French, this groundbreaking work of philosophical theory is now available in its first complete English language translation.

Gilbert Simondon (1924–1989) was a philosopher of technology whose principal publications have inspired several generations of thinkers, including Gilles Deleuze.

Taylor Adkins is an independent scholar and translator.