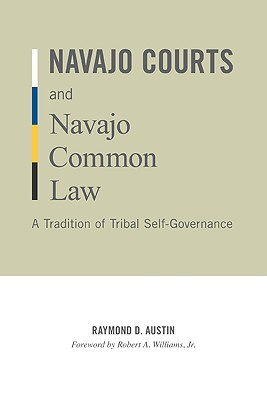 The Navajo Nation court system is the largest and most established tribal legal system in the world. Since the landmark 1959 U.S. Supreme Court decision in Williams v. Lee that affirmed tribal court authority over reservation-based claims, the Navajo Nation has been at the vanguard of a far-reaching, transformative jurisprudential movement among Indian tribes in North America and indigenous peoples around the world to retrieve and use traditional values to address contemporary legal issues.

A justice on the Navajo Nation Supreme Court for sixteen years, Justice Raymond D. Austin has been deeply involved in the movement to develop tribal courts and tribal law as effective means of modern self-government. He has written foundational opinions that have established Navajo common law and, throughout his legal career, has recognized the benefit of tribal customs and traditions as tools of restorative justice.

In Navajo Courts and Navajo Common Law, Justice Austin considers the history and implications of how the Navajo Nation courts apply foundational Navajo doctrines to modern legal issues. He explains key Navajo foundational concepts like Hózhó (harmony), K'é (peacefulness and solidarity), and K'éí (kinship) both within the Navajo cultural context and, using the case method of legal analysis, as they are adapted and applied by Navajo judges in virtually every important area of legal life in the tribe.

In addition to detailed case studies, Justice Austin provides a broad view of tribal law, documenting the development of tribal courts as important institutions of indigenous self-governance and outlining how other indigenous peoples, both in North America and elsewhere around the world, can draw on traditional precepts to achieve self-determination and self-government, solve community problems, and control their own futures.

Justice Raymond D. Austin is the Indigenous Peoples Law and Policy Program’s Distinguished Jurist in Residence at the James E. Rogers College of Law at the University of Arizona. A member of the Arizona and Utah state bars and the Navajo Nation Bar Association, he served on the Navajo Nation Supreme Court from 1985 to 2001. Justice Austin is Diné from the Navajo Nation.