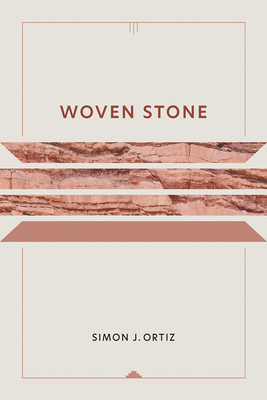 By Simon J. Ortiz
Email or call for price.
Not Currently Available Through Reach and Teach

This is book number 21 in the Sun Tracks series.

"What I do as a writer, teacher, and storyteller is to demystify language," says Simon Ortiz. Widely regarded as one of the country's most important Native American poets, Ortiz has led a thirty-year career marked by a fascination with language—and by a love of his people. This omnibus of three previous works offers old and new readers an appreciation of the fruits of his dedication.

Going for the Rain (1976) expresses closeness to a specific Native American way of life and its philosophy and is structured in the narrative form of a journey on the road of life. A Good Journey (1977), an evocation of Ortiz's constant awareness of his heritage, draws on the oral tradition of his Pueblo culture. Fight Back: For the Sake of the People, For the Sake of the Land (1980)—revised for this volume—has its origins in his work as a laborer in the uranium industry and is intended as a political observation and statement about that industry's effects on Native American lands and lives.

In an introduction written for this volume, Ortiz tells of his boyhood in Acoma Pueblo, his early love for language, his education, and his exposure to the wider world. He traces his development as a writer, recalling his attraction to the Beats and his growing political awareness, especially a consciousness of his and other people's social struggle.

"Native American writers must have an individual and communally unified commitment to their art and its relationship to their indigenous culture and people," writes Ortiz. "Through our poetry, prose, and other written works that evoke love, respect, and responsibility, Native Americans may be able to help the United States of America to go beyond survival."

Poet, fiction writer, essayist, and storyteller Simon Ortiz is a native of Acoma Pueblo and is the author of numerous books.

"Simon Ortiz has given us indelible proof that the written word is indeed an effective weapon. And we are left with a sense of renewal and hope: 'to behold with passion and awe the wonders and bounty and bearty of creation and the world around us.'"—Western American Literature

"It is a relief to read poems as beautiful as these."—Booklist

"[A] wise and prophetic book. . . . the autobiography of the spirit of Simon J. Ortiz, who has advanced out of the mist of the reservation and into an affirmative and natural embracing of the world as it is."—El Palacio