The Business of Television (Paperback) 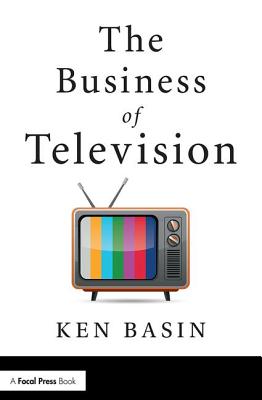 In this book, esteemed television executive and Harvard lecturer Ken Basin offers a comprehensive overview of the business, financial, and legal structure of the U.S. television industry, as well as its dealmaking norms. Written for working or aspiring creative professionals who want to better understand the entertainment industry - as well as for executives, agents, managers, and lawyers looking for a reference guide - The Business of Television presents a readable, in-depth introduction to rights and talent negotiations, intellectual property, backend deals, licensing, streaming platforms, international production, and much more.

The book also includes breakdowns after each chapter summarizing deal points and points of negotiation, a glossary, a list of referenced cases, and a wealth of real-world examples to help readers put the material into context.

Ken Basin currently works as Executive Vice President, Business Affairs at Paramount Television, where he is responsible for dealmaking with talent, producers, and licensees in support of Paramount's broad slate of premium original television programming. Prior to joining Paramount, Ken served as Vice President, U.S. Business Affairs for Sony Pictures Television, and before that, Co-Head of Business Affairs for Amazon Studios. Ken is also a published scholar, as well as a long-time speaker and commentator, on entertainment and intellectual property legal matters.  Since 2014, he has been a Lecturer on Law at Harvard Law School, where he teaches Entertainment and Media Law, and has previously served as an Adjunct Professor at UCLA School of Law (teaching Television Law) and Southwestern Law School (teaching Motion Picture Production Law).