A Hundred Acres of America: The Geography of Jewish American Literary History (Hardcover) 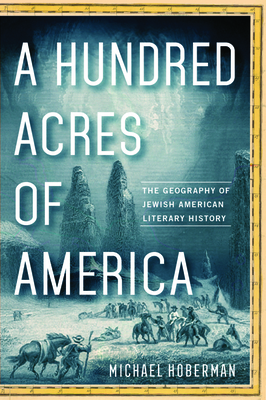 MICHAEL HOBERMAN is a professor of English studies at Fitchburg State University in Massachusetts. He is the author of several books, including New Israel/New England: Jews and Puritans in Early America.

"Michael Hoberman has opened up freshly the pathway in Jewish American writings about the sense of place, how Jewish life in America has come to be and feel at home."
— Jules Chametzky

"At once critically imaginative and rigorously methodological, A Hundred Acres of America is a genuinely exciting, pathbreaking work of breathtaking historical, geographical, and cultural scope."
— Ranen Omer-Sherman

"A Hundred Acres is a worthy and lucid genealogy of the under-explored Jewish American geographical imagination, presented convincingly as an engagement with as well as departure from certain forms of dominant U.S. spatiality. Hoberman's nimble treatment of key texts captures the Jewish stamp on iconic American places, from 'the frontier' to the city and the 'suburban pastoral' as well as the Americanization of Jewish spaces elsewhere and, importantly, contributes to a shift in Jewish American literary scholarship away from the classic topics of immigration and assimilation toward a multidimensional criticism."
— Dalia Kandiyoti

"The book discusses a variety of places important to Americans, including the evolving West of the 19th century, the small towns of the Midwest and 20th-century suburbia. It ends with a landscape that has been significant to the Jewish people for thousands of years: Israel [and] suggests that the works it examines ask questions that aren’t easy to answer — but then asking hard questions is a sign of good literature."
— Greenfield Reporter

"Hoberman’s study...chal­lenges us to recon­sid­er what the canon of our lit­er­a­ture ought to be in a series of orig­i­nal read­ings of both obscure and major fig­ures whose vision of land­scape — above all sites of mem­o­ry and myth — shaped their vision of Amer­i­ca in rich and strik­ing ways."
— Jewish Book Council

"Carefully chosen, sensitively read, historically contextualized, and situated within the broader currents of American literature....An apt reminder that Jews’ engagement with place has always been fraught and that the places that we take for granted are always in the midst of being imagined and invented, a process that is almost never innocent."
— Marginalia

"The richness of Hoberman’s work is partly a feature of its extensive chronology, which includes 150 years of literary history, and partly due to his careful comparisons that are geographically, literarily, religiously and culturally diverse and bring together an uncommon range of places, authors, texts, and histories. Hoberman offers a fresh perspective on a body of literature."
— MELUS