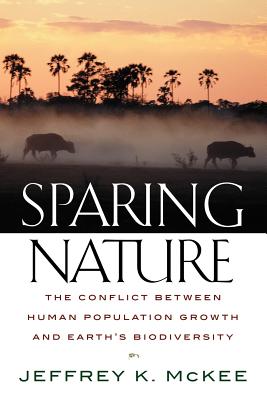 Are humans too good at adapting to the earth’s natural environment? Every day, there is a net gain of more than 200,000 people on the planet—that’s 146 a minute. Has our explosive population growth led to the mass extinction of countless species in the earth’s plant and animal communities?

Jeffrey K. McKee contends yes. The more people there are, the more we push aside wild plants and animals. In Sparing Nature, he explores the cause-and-effect relationship between these two trends, demonstrating that nature is too sparing to accommodate both a richly diverse living world and a rapidly expanding number of people. The author probes the past to find that humans and their ancestors have had negative impacts on species biodiversity for nearly two million years, and that extinction rates have accelerated since the origins of agriculture. Today entire ecosystems are in peril due to the relentless growth of the human population. McKee gives a guided tour of the interconnections within the living world to reveal the meaning and value of biodiversity, making the maze of technical research and scientific debates accessible to the general reader. Because it is clear that conservation cannot be left to the whims of changing human priorities, McKee takes the unabashedly neo-Malthusian position that the most effective measure to save earth’s biodiversity is to slow the growth of human populations. By conscientiously becoming more responsible about our reproductive habits and our impact on other living beings, we can ensure that nature’s services will make our lives not only supportable, but also sustainable for this century and beyond.