The Churching of America, 1776-2005: Winners and Losers in Our Religious Economy (Paperback) 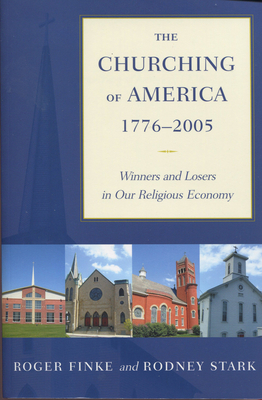 Although many Americans assume that religious participation has declined in America, Finke and Stark present a different picture. In 1776, fewer than 1 in 5 Americans were active in church affairs. Today, church membership includes about 6 out of 10 people.

But, as Finke and Stark show, not all denominations benefited. They explain how and why the early nineteenth-century churches began their descent, while two newcomer sects, the Baptists and the Methodists, gained ground. They also analyze why the Methodists then began a long, downward slide, why the Baptists continued to succeed, how the Catholic Church met the competition of ardent Protestant missionaries, and why the Catholic commitment has declined since Vatican II. The authors also explain why ecumenical movements always fail

In short, Americans are not abandoning religion; they have been moving away from established denominations. A "church-sect process" is always under way, Finke and Stark argue, as successful churches lose their organizational vigor and are replaced by less worldly groups.

Some observers assert that the rise in churching rates indicates increased participation, not increased belief. Finke and Stark challenge this as well. They find that those groups that have gained the greatest numbers have demanded that their followers accept traditional doctrines and otherworldliness. They argue that religious organizations can thrive only when they comfort souls and demand sacrifice. When theology becomes too logical, or too secular, it loses people.