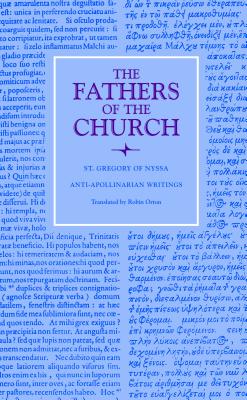 St. Gregory of Nyssa wrote two works during the 380s attacking the Christological teaching of Apolinarius of Laodicea and his followers. These are the substantial treatise Refutation of the Views of Apolinarius (the Antirrheticus) and the short letter to the Bishop of Alexandria, To Theophilus, Against the Apollinarians. The Antirrheticus is a hostile commentary on Apolinarius's work entitled The Demonstration (Apodeixis) of the Divine Enfleshment according to the Likeness of a Human Being. The Apodeixis has not survived independently, and our knowledge of it depends almost completely on Gregory. The Antirrheticus is a neglected work, and this is the first English translation to be published. It has had a poor reputation among many modern scholars. Gregory is accused of being prolix and repetitive and of having misrepresented or misunderstood many of Apolinarius's Christological ideas. It is argued here that the work is nevertheless of considerable theological interest. It is able in fact successfully to identify the principal problems raised by Apolinarius's central concept of Christ as an "enfleshed mind," and also provides an essential insight into Gregory's own Christology and soteriology. The translation is interweaved with a commentary to provide the reader with some guidance through the complexities of Gregory's arguments. The introduction includes an overview of the history of Apollinarianism and discusses the extent to which it is possible to reconstruct, from the fragments quoted by Gregory, the arguments of Apolinarius's Apodeixis to which he is responding. It also examines the background to and the chronology of both of Gregory's anti-Apollinarian works, and looks critically at the arguments that they deploy.