Shaw and Feminisms: On Stage and Off (Florida Bernard Shaw) (Paperback) 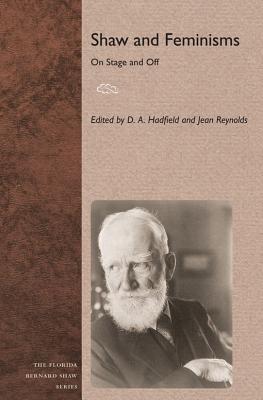 By D. A. Hadfield (Editor), Jean Reynolds (Editor)
Email or call for price.

"A worthy successor to Fabian Feminist. Shaw's influence on the self-image and public standing of women has been immense, both in his time and in our own, yet Shaw has also been widely and sometimes appallingly misunderstood. This book should help clarify the complexities of the issue and provoke continued reflection and debate."--Julie A. Sparks, San Jose State University

"This collection suggests that Shaw's views of women are still relevant and provocative and that the dialogue with Shaw is far from over."--Sally Peters, author of Bernard Shaw: The Ascent of the Superman

When offstage actions contradict a playwright's onstage message, literary study gets messy. In his personal relationships, George Bernard Shaw was often ambivalent toward liberated women--surprisingly so, considering his reputation as one of the first champions of women's rights. His private attitudes sit uncomfortably beside his public philosophies that were so foundational to first-wave feminism.

D. A. Hadfield is lecturer in English at the University of Waterloo. She is the author of Re: Producing Women's Dramatic History: The Politics of Playing in Toronto. Jean Reynolds is professor emerita of English at Polk State College. She has written five books, including Pygmalion's Wordplay: The Postmodern Shaw.