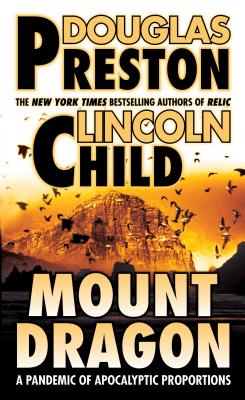 By Douglas Preston, Lincoln Child
$9.99
Email or call for price.

In this thriller from authors Douglas Preston and Lincoln Child, a genetically engineered virus threatens to wipe out humanity

Mount Dragon: an enigmatic research complex hidden in the vast desert of New Mexico. Guy Carson and Susana Cabeza de Vaca have come to Mount Dragon to work shoulder to shoulder with some of the greatest scientific minds on the planet. Led by visionary genius Brent Scopes, their secret goal is a medical breakthrough that promises to bring incalculable benefits to the human race.

But while Scopes believes he is leading the way to a new world order, he may in fact be opening the door to mass human extinction. And when Guy and Susana attempt to stop him they find themselves locked in a frightening battle with Scopes, his henchmen, and the apocalyptic nightmare that science has unleashed . . .

Douglas Preston is the co-author with Lincoln Child of the celebrated Pendergast series of novels, including such bestselling titles as Fever Dream, The Book of the Dead, The Wheel of Darkness, and Relic, which became a number one box office hit movie. His solo novels include the New York Times bestsellers Impact, Blasphemy, The Codex, and Tyrannosaur Canyon. Preston is an expert long-distance horseman, a member of the elite Long Riders Guild, and a Fellow of the Royal Geographical Society. He has travelled to remote parts of the world as an archaeological correspondent for The New Yorker. He also worked as an editor and writer at the American Museum of Natural History in New York and taught nonfiction writing at Princeton University. Preston is on the Board of Directors for International Thriller Writers, and serves on the Governing Council of the Authors Guild.

Lincoln Child is the author of Utopia and Death Match, as well as a number of New York Times bestselling thrillers with Douglas Preston. He lives with his wife and daughter in Morristown, New Jersey.

“Mount Dragon is as marvelously complex as any thriller I've ever read . . . . It is nothing less than a tour de force!” —Stuart Woods, author of Choke

“A delightfully gruesome yarn and an apt mirror of our love-hate relationship with science.” —Business Week

“The writing team that scared the willies out of readers with The Relic returns with a second, equally gripping novel of techno-terror . . . . It's a grand and scary story, with just enough grisly detail to stimulate real-life fears and characters full enough to engage the attention.” —Publishers Weekly

“Read this and you'll be panting for Preston and Child's next yarn.” —Booklist