Buddhism and Islam on the Silk Road (Encounters with Asia) (Paperback) 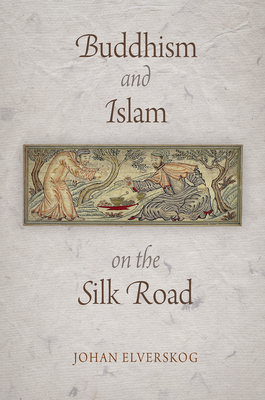 Buddhism and Islam on the Silk Road Johan Elverskog Winner of the 2011 Award for Excellence in the Historical Study of Religion from the American Academy of Religion Selected by Choice magazine as an Outstanding Academic Title for 2010 "Johan Elverskog is exceedingly well read in the relevant literature, and his book is fascinating and thought-provoking."--TLS " Elverskog] challenges deeply ingrained misperceptions about the historical relationship between Buddhism and Islam, and more importantly challenges us to rethink more broadly many of our assumptions about cultural encounters across Eurasia and the basis on which they rest. This is "world history" at its best, avoiding the oversimplifications of model building that have sometimes framed that subject."--The Silk Road "The book, brilliantly moving from the interaction between economic and religious regimes to cross-cultural artistic production, succeeds in presenting a rich history full of rosy moments as well as tension and clashes. In so doing, Elverskog has made a very important and unique contribution to the community of historians of the world and Asia as well as students of religion."--American Historical Review "Elverskog has produced, for the very first time, a detailed account of the long-term interaction of Buddhism and Islam that should be welcomed by all students of Eurasian history. His approach to this issue is informed, balanced, and insightful. He understands that it is important to recognize the diversity within both religions, and that their encounters were not clashes between monolithic belief systems. Their relationship ran the gamut between religious violence and fanaticism to cultural exchange and tolerance."--Thomas T. Allsen, author of The Royal Hunt in Eurasian History "This is the most thorough treatment I have seen of the historical relationship between Buddhism and Islam. Elverskog skillfully and often entertainingly corrects many longstanding stereotypes about both religions, and richly demonstrates the complexity of their historical interaction with each other. This book is thoughtful, its arguments well supported, and its style very accessible."--Richard Foltz, author of Religions of the Silk Road In the contemporary world the meeting of Buddhism and Islam is most often imagined as one of violent confrontation. Indeed, the Taliban's destruction of the Bamiyan Buddhas in 2001 seemed not only to reenact the infamous Muslim destruction of Nalanda monastery in the thirteenth century but also to reaffirm the stereotypes of Buddhism as a peaceful, rational philosophy and Islam as an inherently violent and irrational religion. But if Buddhist-Muslim history was simply repeated instances of Muslim militants attacking representations of the Buddha, how had the Bamiyan Buddha statues survived thirteen hundred years of Muslim rule? Johan Elverskog is Altshuler University Distinguished Teaching Professor and Chair of the Religious Studies Department at Southern Methodist University. Encounters with Asia 2010 352 pages 6 x 9 48 illus. ISBN 978-0-8122-4237-9 Cloth $69.95s 45.50 ISBN 978-0-8122-2259-3 Paper $29.95s 19.50 ISBN 978-0-8122-0531-2 Ebook $29.95s 19.50 World Rights Asian Studies, Religion, History Short copy: This groundbreaking work challenges contemporary stereotypes by revealing how both Buddhist and Muslim religious traditions were shaped by a millennium of cross-cultural exchange along the Silk Road from Iran to China.