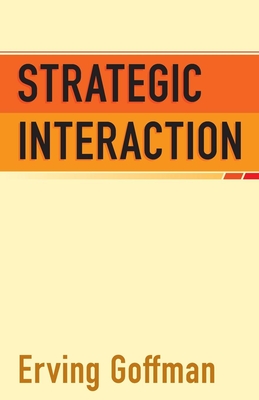 The two essays in this classic work by sociologist Erving Goffman deal with the calculative, gamelike aspects of human interaction. Goffman examines the strategy of words and deeds; he uses the term strategic interaction to describe gamelike events in which an individual's situation is fully dependent on the move of one's opponent and in which both players know this and have the wit to use this awareness for advantage. Goffman aims to show that strategic interaction can be isolated analytically from the general study of communication and face-to-face interaction.

The first essay addresses expression games, in which a participant spars to discover the value of information given openly or unwittingly by another. The author uses vivid examples from espionage literature and high-level political intrigue to show how people mislead one another in the information game. Both observer and observed create evidence that is false and uncover evidence that is real.

In Strategic Interaction, the book's second essay, action is the central concern, and expression games are secondary. Goffman makes clear that often, when it seems that an opponent sets off a course of action through verbal communication, he really has a finger on your trigger, your chips on the table, or your check in his bank. Communication may reinforce conduct, but in the end, action speaks louder.

Those who gamble with their wits, and those who study those who do, will find this analysis important and stimulating.