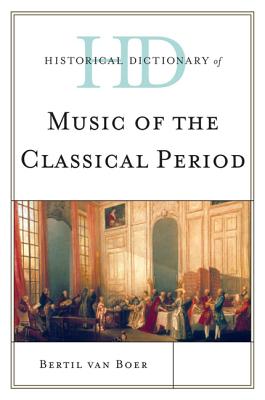 By Bertil Van Boer
Email or call for price.

When we speak of "classical music" it often refers rather loosely to serious "art" music but at the core is really the music of the classical period running from about 1730 to 1800, give or take. This was truly one of the most glorious periods for both composition and performance and it is this classical music which is still at the core of today's repertoire. Obvious names connected with this period are Haydn, Mozart and Beethoven, but there were many more still reasonably well known like Gluck and C.P.E Bach, and dozens more who are regrettably little known today. This Historical Dictionary of Music of the Classical Period includes not only these composers, but also eminent conductors and performers, patrons, and publishers. There are also dictionary entries on major centers of music-making, typical instruments, important technical terms, and emerging musical forms, including the symphony and opera. Indeed, with a 1,000 cross-referenced entries, there is information on most matters of interest. This is prefaced by an extensive chronology, tracing the course of this period from year to year, and an introduction taking a careful look at the period as a whole. Finally, there is a substantial bibliography. Surely, this is a book which will appeal not only to students and researchers but all music-lovers.

Bertil van Boer is professor of Musicology-Theory at Western Washington University. Trained as a performer, his focus of research is on the music of the European periphery during the 18th century, with special emphasis on Scandinavia. He has written substantially on Classical music, this partly in the form of articles in learned journals and reference works, and has also edited music for performance for Naxos Records. He was one of the founding members and past president of the Society for Eighteenth-Century Music.