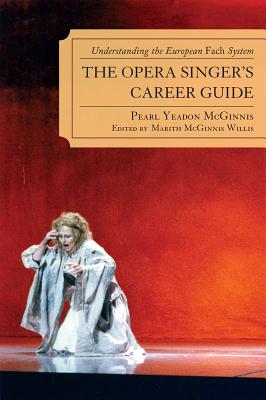 Any singer longing to have a career in opera, particularly in Europe, should be familiar with the European system of classifying voices know as Fach. The Opera Singer's Career Guide: Understanding the European Fach System presents valuable information to help readers learn, understand, and use the Fach system to their professional advantage. More than just soprano, alto, tenor, or bass, students and professionals alike should know the 25 different Fach categories fully defined here, along with the examples of roles, audition arias, and European opera houses and agents provided. Based on careful research and personal experience, singer and teacher Pearl Yeadon McGinnis describes the features, characteristics, and benefits of the Fach system, including voice categorization and classification and using Fach to train the young voice. She provides practical information on maintaining a career in opera, such as the different types, procedures, and pitfalls of opera auditions; types of opera contracts and contract negotiations; and the value of networking. She explains the different styles of European opera houses and gives an example of life in a state level German opera house, including the various performance spaces, the makeup and responsibilities of an ensemble, and the jobs and functions of opera house personnel. A glossary and several appendixes supply tools for auditioning, such as newly classified roles for Children, Lyric, and Beginner singers; roles for the established Fach categories; lists of opera agents and houses in the German speaking countries; and suggested audition arias by Fach. In addition, practical details are offered about establishing and maintaining residency in Europe, obtaining permission to live and work in Europe, and helpful hints about customs and travel.

Pearl Yeadon McGinnis (1943-2007) was professor of music and the director of Opera Workshop at Missouri State University. Dr. Yeadon is the author of The Solo Vocal Music of American Composer John La Montaine: Compositions for Voice on Piano (2004). Marith McGinnis Willis is an actress, singer, director, and vocal instructor. She collaborated with her sister on a series of benefit concerts and currently sings with Cantate Carlisle.