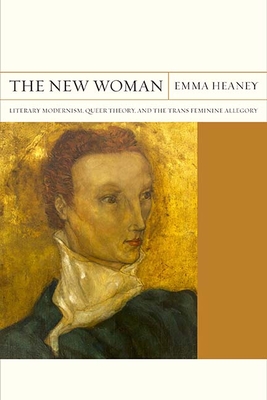 By Emma Heaney
Email or call for price.

The New Woman: Literary Modernism, Queer Theory, and the Trans Feminine Allegory traces the use of the trans feminine as an allegorical figure, from the practice's origins in nineteenth-century sexology through writings in the fields of psychoanalysis, Modernist fiction, and contemporary Queer Theory.

The book is the first to identify the process by which medical sources simplified the diversity of trans feminine experience into a single diagnostic narrative. It then demonstrates that this medical figure became an archetype for the "sexual anarchy" of the Modernist period in works by  Aldous Huxley, James Joyce, Djuna Barnes, T. S. Eliot, and Jean Genet.

Thus illuminating the trans feminine's Modernist provenance, the book examines foundational works of Queer Theory that resuscitated the trans feminine allegory at the end of the twentieth century. Insightful and seminal, The New Woman debunks the pervasive reflex beginning in the 1990s to connect trans experience to a late twentieth-century collapse of sexual differences by revealing the Modernist roots of that very formulation.

"The New Woman is an exciting breakthrough for scholars and armchair readers alike who are seeking to put the femme in feminist studies, lesbian studies, and even queer theory." —LambdaLiterary

"Heaney provides insightful and informed analyses of a wide range of writings from the modernist era, in the context of medical, psychoanalytic, feminist and material challenges to binary notions of gender and sex. Reading what she terms a 'trans feminine archive' of first-person accounts, Heaney argues against the figural appropriation of the trans feminine, detailing a range of trans experience and the various ways individuals have related to their bodies and sex experiences. Her argument is compelling, important, and timely."—Pamela L. Caughie, author of Virginia Woolf and Postmodernism: Literature in Quest and Question of Itself

"While trans masculine studies have helped to redefine both Queer Theory and literary Modernism, trans feminist studies have largely been absent. The theoretical insights of this book will provide an original and long overdue addition to the fields of Queer Theory, Modernism, and twentieth-century literary and cultural studies."—Jaime E. Hovey, author of A Thousand Words: Portraiture, Style, and Queer Modernism


"In a thoughtful, provocative analysis of the transfeminine, Heaney draws on diverse literary, autobiographical, medical, psychoanalytical, and theoretical sources, from the late 19th century to the present, to refute monolithic, demeaning views of transfeminine experiences and culture. Especially illuminating are case histories and life writing, which afford ample evidence to counter assumptions, held by many cis heterosexuals, that trans females are isolated, persecuted, and abused. Heaney’s title alludes to the rebellious new woman of the early 20th century, a transitional figure seeking redefinition and liberation from constricting roles. Highly recommended." —CHOICE

"Joyceans will find Heaney's study of Ulysses refreshingly inventive, eschewing long-held traditions in favor of her material trans feminist analysis . . . Heaney has introduced a vocabulary and methodology that opens the door for future modernist studies involving gender, trans experience, and queer themes. Heaney's thorough application of her methodology to Joyce and Huxley's work in particular is a long-needed addition to the literature, and The New Woman makes an important contribution to the field." —Casey Lawrence, James Joyce Quarterly