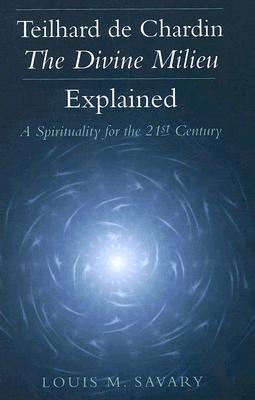 During the 20th century, Jesuit priest Teilhard de Chardin developed a truly revolutionary spirituality based on the discoveries of science and a comprehensive evolutionary perspective--a perspective never conceived of before by traditional spiritual writers. Through his integration of science and faith, Teilhard offered us a new way to understand the Word of God. In Teilhard de Chardin--The Divine Milieu Explained, author Louis M. Savary sets forth a series of revolutionary spiritual practices that integrate science and faith, based on the evolutionary spirituality of Teilhard's pathbreaking work, The Divine Milieu. As a result, this volume: - makes accessible to a wide audience the ideas of Teilhard's spirituality - explains principles of Teilhard's scientific thought not explicitly formulated in The Divine Milieu - shows that Teilhard's theology and spirituality are fully compatible with classical Christian theology - suggests many simple reflections or spiritual practices to help put Teilhard's spirituality directly into daily life Teilhard never spelled out for us how to practice this new understanding in our daily lives. And until we can practice it, this new transformative spirituality, remains simply a collection of revolutionary ideas about God that we can only talk about. Having taught and practiced Teilhardian ideas for almost forty years, author Louis M. Savary offers this work as a first step toward establishing new spiritual practices that translate Teilhard's ideas into action. It shows how to both think about one's faith and live it in light of evolutionary science. +