The Cartoon Introduction to Economics, Volume I: Microeconomics (Paperback) 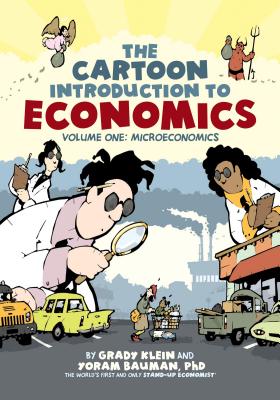 The award-winning illustrator Grady Klein has paired up with the world's only stand-up economist, Yoram Bauman, PhD, to take the dismal out of the dismal science. From the optimizing individual to game theory to price theory, The Cartoon Introduction to Economics is the most digestible, explicable, and humorous 200-page introduction to microeconomics you'll ever read.

Bauman has put the "comedy" into "economy" at comedy clubs and universities around the country and around the world (his "Principles of Economics, Translated" is a YouTube cult classic). As an educator at both the university and high school levels, he has learned how to make economics relevant to today's world and today's students. As Google's chief economist, Hal Varian, wrote, "You don't need a brand-new economics. You just need to see the really cool stuff, the material they didn't get to when you studied economics." The Cartoon Introduction to Economics is all about integrating the really cool stuff into an overview of the entire discipline of microeconomics, from decision trees to game trees to taxes and thinking at the margin.

Rendering the cool stuff fun is the artistry of the illustrator and lauded graphic novelist Klein. Panel by panel, page by page, he puts comics into economics. So if the vertiginous economy or a dour professor's 600-page econ textbook has you desperate for a fun, factual guide to economics, reach for The Cartoon Introduction to Economics and let the collaborative genius of the Klein-Bauman team walk you through an entire introductory microeconomics course.

An environmental economist at the University of Washington (and a part-time teacher at Seattle’s Lakeside High School), Yoram Bauman, PhD, is the world’s first and only stand-up economist.

“Learning economics should be fun. Klein and Bauman make sure that it is.” —N. Gregory Mankiw, Professor of Economics, Harvard University, and author of Principles of Economics

“Hilarity and economics are not often found together, but this book has a lot of both. It also does a great job of explaining important economic concepts simply, accurately, and entertainingly--quite a feat.” —Eric Maskin, Nobel Laureate in Economics

“This is a seriously funny book! Klein and Bauman offer an enlightening and entertaining look at why our day-to-day choices matter and how they all combine. Students will find this a great addition to their textbooks, and critics of the discipline will learn what economics is really about.” —Diane Coyle, author of The Soulful Science

“Had Art Spiegelman and John Maynard Keynes collaborated on a comic book on economics, they could only have dreamed of coming up with something this good.” —Jonathan A. Shayne, a.k.a. Merle Hazard, country singer and founder of Shayne & Co., LLC

“For anybody who is genuinely interested in economics, who really wants to learn the jargon, or anyone who is starting out studying an economics course, this is just a brilliant source.” —Tim Harford, author of Adapt