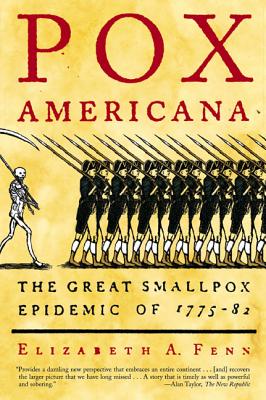 The astonishing, hitherto unknown truths about a disease that transformed the United States at its birth

A horrifying epidemic of smallpox was sweeping across the Americas when the American Revolution began, and yet we know almost nothing about it. Elizabeth A. Fenn is the first historian to reveal how deeply variola affected the outcome of the war in every colony and the lives of everyone in North America.

By 1776, when military action and political ferment increased the movement of people and microbes, the epidemic worsened. Fenn's remarkable research shows us how smallpox devastated the American troops at Québec and kept them at bay during the British occupation of Boston. Soon the disease affected the war in Virginia, where it ravaged slaves who had escaped to join the British forces. During the terrible winter at Valley Forge, General Washington had to decide if and when to attempt the risky inoculation of his troops. In 1779, while Creeks and Cherokees were dying in Georgia, smallpox broke out in Mexico City, whence it followed travelers going north, striking Santa Fe and outlying pueblos in January 1781. Simultaneously it moved up the Pacific coast and east across the plains as far as Hudson's Bay.

The destructive, desolating power of smallpox made for a cascade of public-health crises and heartbreaking human drama. Fenn's innovative work shows how this mega-tragedy was met and what its consequences were for America.

Elizabeth A. Fenn teaches history at George Washington University. The author of Natives and Newcomers, she lives in Hillsborough, North Carolina.

“Pox Americana sifts carefully through journals and records of the late 18th century to reconstruct the path of the disease. Using resources as varied as the burial records kept by Catholic Priests in the Southwest and the diaries of explorers traveling up the Pacific coast, she pieces together a gripping, untold story and even tries to arrive at an accurate statistical tally for the seven-year blight . . . Scholarly yet detectivelike.” —Janet Maslin, The New York Times

“With Pox Americana, Fenn has made a stunning contribution to American Revolution studies.” —Michael Kenney, The Boston Globe

“A considerable achievement and an extraordinary work of history that uncovers an episode that reshaped America as surely as the War of Independence.” —Garance Franke-Ruta, The Washington Monthly

“Fenn provides a dazzling new perspective that embraces the entire continent . . . A story that is timely as well as powerful and sobering.” —Alan Taylor, The New Republic
“After the flood of works that talented scholars have devoted in recent years to the American Revolution, who could have expected a major new study of an unexamined and scarcely suspected dimension of it? That is what Elizabeth Fenn has produced in this extraordinary book, which concerns the workings of a catastrophic epidemic that shaped both the course of the Revolutionary War and the way people lived throughout the North American continent.” —Edmund S. Morgan, Yale University

“With impressive research and sparkling prose, Elizabeth Fenn addresses a greatly neglected subject: a smallpox epidemic that not only was continent-wide but had the real possibility of derailing the War of Independence. Pox Americana is an excellent book.” —Professor Don Higginbotham, The University of North Carolina at Chapel Hill

“I thought that the most important participants in the saga of North America in the era of the American Revolution were the Native Americans, African Americans, Patriots, Redcoats, and French. Elizabeth A. Fenn convinces me that I must add the smallpox virus to the list of protagonists or fail to comprehend the actions of all the others.” —Alfred W. Crosby, author of The Columbian Exchange