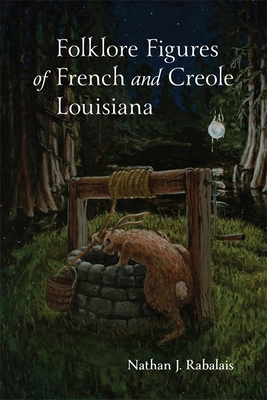 In Folklore Figures of French and Creole Louisiana, Nathan J. Rabalais examines the impact of Louisiana's remarkably diverse cultural and ethnic groups on folklore characters and motifs during the eighteenth and nineteenth centuries. Establishing connections between Louisiana and France, West Africa, Canada, and the Antilles, Rabalais explores how folk characters, motifs, and morals adapted to their new contexts in Louisiana. By viewing the state's folklore in the light of its immigration history, he demonstrates how folktales can serve as indicators of sociocultural adaptation as well as contact among cultural communities. In particular, he examines the ways in which collective traumas experienced by Louisiana's major ethnic groups--slavery, the grand d rangement, linguistic discrimination--resulted in fundamental changes in these folktales in relation to their European and African counterparts.

Rabalais points to the development of an altered moral economy in Cajun and Creole folktales. Conventional heroic qualities, such as physical strength, are subverted in Louisiana folklore in favor of wit and cunning. Analyses of Black Creole animal tales like those of Bouki et Lapin and Tortie demonstrate the trickster hero's ability to overcome both literal and symbolic entrapment through cleverness. Some elements of Louisiana's folklore tradition, such as the rougarou and cauchemar, remain an integral presence in the state's cultural landscape, apparent in humor, popular culture, regional branding, and children's books. Through its adaptive use of folklore, French and Creole Louisiana will continue to retell old stories in innovative ways as well as create new stories for future generations.