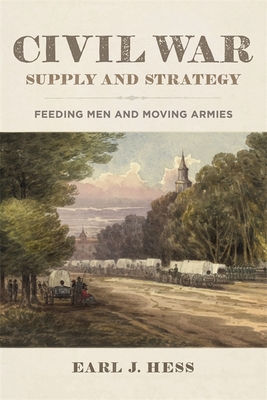 Civil War Supply and Strategy stands as a sweeping examination of the decisive link between the distribution of provisions to soldiers and the strategic movement of armies during the Civil War. Award-winning historian Earl J. Hess reveals how that dynamic served as the key to success, especially for the Union army as it undertook bold offensives striking far behind Confederate lines. How generals and their subordinates organized military resources to provide food for both men and animals under their command, he argues, proved essential to Union victory.

The Union army developed a powerful logistical capability that enabled it to penetrate deep into Confederate territory and exert control over select regions of the South. Logistics and supply empowered Union offensive strategy but limited it as well; heavily dependent on supply lines, road systems, preexisting railroad lines, and natural waterways, Union strategy worked far better in the more developed Upper South. Union commanders encountered unique problems in the Deep South, where needed infrastructure was more scarce. While the Mississippi River allowed Northern armies to access the region along a narrow corridor and capture key cities and towns along its banks, the dearth of rail lines nearly stymied William T. Sherman's advance to Atlanta. In other parts of the Deep South, the Union army relied on massive strategic raids to destroy resources and propel its military might into the heart of the Confederacy. As Hess's study shows, from the perspective of maintaining food supply and moving armies, there existed two main theaters of operation, north and south, that proved just as important as the three conventional eastern, western, and Trans-Mississippi theaters. Indeed, the conflict in the Upper South proved so different from that in the Deep South that the ability of Federal officials to negotiate the logistical complications associated with army mobility played a crucial role in determining the outcome of the war.

Earl J. Hess, Stewart W. McClelland Chair in History at Lincoln Memorial University, is the author of more than twenty books on the Civil War, including Civil War Infantry Tactics: Training, Combat, and Small-Unit Effectiveness, winner of the 2016 Tom Watson Brown Book Award from the Society of Civil War Historians