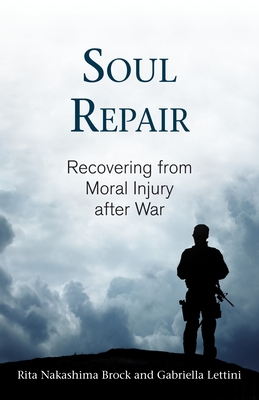 The first book to explore the idea and effect of moral injury on veterans, their families, and their communities

Although veterans make up only 7 percent of the U.S. population, they account for an alarming 20 percent of all suicides. And though treatment of post-traumatic stress disorder has undoubtedly alleviated suffering and allowed many service members returning from combat to transition to civilian life, the suicide rate for veterans under thirty has been increasing. Research by Veterans Administration health professionals and veterans’ own experiences now suggest an ancient but unaddressed wound of war may be a factor: moral injury. This deep-seated sense of transgression includes feelings of shame, grief, meaninglessness, and remorse from having violated core moral beliefs.

Rita Nakashima Brock and Gabriella Lettini, who both grew up in families deeply affected by war, have been working closely with vets on what moral injury looks like, how vets cope with it, and what can be done to heal the damage inflicted on soldiers’ consciences. In Soul Repair, the authors tell the stories of four veterans of wars from Vietnam to our current conflicts in Iraq and Afghanistan—Camillo “Mac” Bica, Herman Keizer Jr., Pamela Lightsey, and Camilo Mejía—who reveal their experiences of moral injury from war and how they have learned to live with it. Brock and Lettini also explore its effect on families and communities, and the community processes that have gradually helped soldiers with their moral injuries.

Soul Repair will help veterans, their families, members of their communities, and clergy understand the impact of war on the consciences of healthy people, support the recovery of moral conscience in society, and restore veterans to civilian life. When a society sends people off to war, it must accept responsibility for returning them home to peace.

Rita Nakashima Brock is research professor and codirector of the Soul Repair Center at Brite Divinity School, Ft. Worth, Texas. She is the author, with Rebecca Ann Parker, of Proverbs of Ashes and Saving Paradise. She lives in Oakland, California.

Gabriella Lettini is Dean of the faculty and Aurelia Henry Reinhardt Professor of Theological Ethics and Studies in Public Ministry at Starr King School for the Ministry–Graduate Theological Union. She lives in Berkeley, California.

“Soul Repair is an eloquent, deeply human reminder that war is not just what takes place on a distant battlefield. It is something that casts a shadow over the lives of those who took part for decades afterwards. The stories told by Lettini and Brock are deepened by what the authors reveal about the way the tragic thread of war’s aftermath has run through their own families.”—Adam Hochschild, author of To End All Wars

“Those you send to war may come home with souls unclean and hearts drowning in bitter mistrust.  But the need for purification after battle has vanished into the blind spot of our culture. We neither offer it to returning veterans, nor remember that we—for whose sake, in whose name, our soldiers went to war—need purification with them. Potent challengers of conventional thinking, rich in heart, those who speak here are voices you will not forget.”—Jonathan Shay, MD, PhD, author of Odysseus in America: Combat Trauma and the Trials of Homecoming

"Very important and deeply moving.  I strongly recommend it.”—James H. Cone, author of The Cross and the Lynching Tree

“Soul Repair is stunning, just beautiful.  Riveting.  This is not just a breakthrough book, it is a breakthrough moment, the kind of work that makes history shift and emotions adjust.  It restores balance and reclaims life.”—Amir Soltani, author of Zahra’s Paradise