With Her Fist Raised: Dorothy Pitman Hughes and the Transformative Power of Black Community Activism (Hardcover) 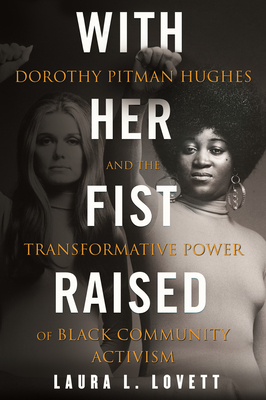 The first biography of Dorothy Pitman Hughes, a trailblazing Black feminist activist whose work made children, race, and welfare rights central to the women’s movement.

Dorothy Pitman Hughes was a transformative community organizer in New York City in the 1970s who shared the stage with Gloria Steinem for 5 years, captivating audiences around the country. After leaving rural Georgia in the 1950s, she moved to New York, determined to fight for civil rights and equality. Historian Laura L. Lovett traces Hughes’s journey as she became a powerhouse activist, responding to the needs of her community and building a platform for its empowerment. She created lasting change by revitalizing her West Side neighborhood, which was subjected to racial discrimination, with nonexistent childcare and substandard housing, where poverty, drug use, a lack of job training, and the effects of the Vietnam War were evident. Hughes created a high-quality childcare center that also offered job training, adult education classes, a Youth Action corps, housing assistance, and food resources.

Hughes’s realization that her neighborhood could be revitalized by actively engaging and including the community was prescient and is startlingly relevant. As her stature grew to a national level, Hughes spent several years traversing the country with Steinem and educating people about feminism, childcare, and race. She moved to Harlem in the 1970s to counter gentrification and bought the franchise to the Miss Greater New York City pageant to demonstrate that Black was beautiful. She also opened an office supply store and became a powerful voice for Black women entrepreneurs and Black-owned businesses. Throughout every phase of her life, Hughes understood the transformative power of activism for Black communities.

With expert research, which includes Hughes’s own accounts of her life, With Her Fist Raised is the necessary biography of a pivotal figure in women’s history and Black feminism whose story will finally be told.

Laura L. Lovett is an Associate Professor of History at the University of Pittsburgh, and specializes in 20th century US women’s history and the history of children’s youth. Lovett is the author of Conceiving the Future: Pronatalism, Reproduction, and the Family in the United States, 1890-1930 and the co-editor of several books including “It’s Our Movement Now”: Black Women’s Politics and the 1977 National Women’s Conference. She is the recipient of numerous honors and was selected as a Distinguished Lecturer for the Organization of American Historians in 2017.

“A vigorous, vivifying portrait. This biography of a firebrand best known for her activism during the second wave of US feminism captures the fervor of the woman and her time.”
—Shelf Awareness

“Lovett’s book is a fascinating read for anyone wanting to know more about Dorothy Pitman Hughes, Black feminist organizing and interracial feminist collaboration in the US women’s movement—a history we should know.”
—Ms. Magazine

“I entered Dorothy’s life when she became my speaking partner, and she was already a pioneer of community organizing in New York City. With Her Fist Raised begins with her family in rural Georgia, and with her vision and bravery in defying a life limited by racism or sexism. I can’t imagine any book that could tell you more about this country or about the human spirit.”
—Gloria Steinem

“With Her Fist Raised is a testament to the impact, diversity, and reach of African American women’s leadership and activism. Guided by Lovett’s careful and thorough research, this story of Dorothy Pitman Hughes’s life enhances the way we understand intersectional activism and social movements in the United States through her fight for civil rights, community empowerment, and childcare. She emerges from the shadow of Steinem as a force in her own right.”
—Francoise Hamlin, author of Crossroads at Clarksdale: The Black Freedom Struggle in the Mississippi Delta after World War II