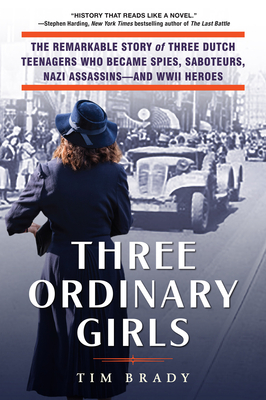 Truus Oversteegen, her younger sister Freddie, and their friend Hannie Schaft, were just teenagers when the commander of The Dutch Royal Army surrendered to the Nazis.  Overnight, nine million Netherlanders were suddenly under the heel of the Nazi boot. As the German-controlled government slowly began to pen in the entire Jewish community and force them indoors, along with the requisite yellow star signifying Jood, so the girls were compelled to become involved in The Resistance.

As Anne Frank and her family were just going into hiding only miles away in Amsterdam, the girls started with simple acts of covert illegality: lifting German ID cards to counterfeit them; distributing fliers announcing strikes, passing out anti-Nazi literature. With each initiative, the danger became more pronounced, the stakes higher.

Soon they were called on for bigger, deadlier jobs:  Ferrying Jewish children to safeguard locations. Stockpiling weapons. Detonating bombs. Intelligence-gathering. Spying. Sabotage. Murder. With each assignment, they became an integral part of the Dutch resistance.  But it was not without peril, heartache, suffering, or loss. Award-winning historian Tim Brady paints a vivid portrait of Tuus, Freddie, and Hannie, three ordinary Dutch girls whose selfless acts of courage as they sought to undermine the Nazis and their Dutch collaborators were nothing short of extraordinary.

Tim Brady is an award-winning history author whose critically acclaimed books include Twelve Desperate Miles, A Death in San Pietro, His Father's Son and Three Ordinary Girls. In addition to contributing numerous articles, reviews, essays and short stories for a wide range of magazines, newspapers and journals, he has written and helped develop a number of television documentaries, including the Peabody Award-winning series, Liberty! The American Revolution for PBS. He lives in St. Paul, Minnesota, and is a graduate of the Iowa Writers' Workshop.