Cowboy Presidents: The Frontier Myth and U.S. Politics since 1900 (Hardcover) 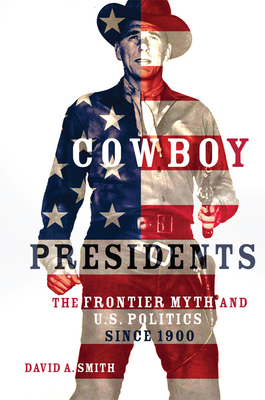 By David A. Smith
Email or call for price.
Usually Arrives in 2-10 Days

For an element so firmly fixed in American culture, the frontier myth is surprisingly flexible. How else to explain its having taken two such different guises in the twentieth century-the progressive, forward-looking politics of Rough Rider president Teddy Roosevelt and the conservative, old-fashioned character and Cold War politics of Ronald Reagan? This is the conundrum at the heart of Cowboy Presidents, which explores the deployment and consequent transformation of the frontier myth by four U.S. presidents: Theodore Roosevelt, Lyndon B. Johnson, Ronald Reagan, and George W. Bush.

Behind the shape-shifting of this myth, historian David A. Smith finds major events in American and world history that have made various aspects of the "Old West" frontier more relevant, and more useful, for promoting radically different political ideologies and agendas. And these divergent adaptations of frontier symbolism have altered the frontier myth. Theodore Roosevelt, with his vigorous pursuit of an activist federal government, helped establish a version of the frontier myth that today would be considered liberal. But then, Smith shows, a series of events from the Lyndon Johnson through Jimmy Carter presidencies-including Vietnam, race riots, and stagflation-seemed to give the lie to the progressive frontier myth.

In the wake of these crises, Smith's analysis reveals, the entire structure and popular representation of frontier symbols and images in American politics shifted dramatically from left to right, and from liberal to conservative, with profound implications for the history of American thought and presidential politics. The now popular idea that "frontier American" leaders and politicians are naturally Republicans with conservative ideals flows directly from the Reagan era.

Cowboy Presidents gives us a new, clarifying perspective on how Americans shape and understand their national identity and sense of purpose; at the same time, reflecting on the essential mutability of a quintessentially national myth, the book suggests that the next iteration of the frontier myth may well be on the horizon.