Masquerade: Treason, the Holocaust, and an Irish Impostor (Hardcover) 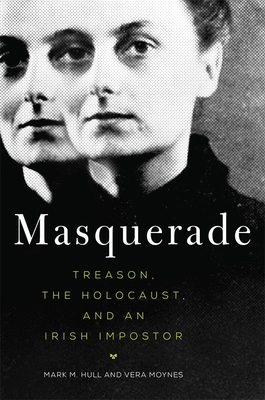 
Phyllis Ursula James. Nora O'Mara. R is n N Mheara. Like her name, the life of Rosaleen James changed many times as she followed a convoluted path from abandoned child, to foster daughter of an aristocratic British family, to traitor during World War II, to her emergence as a full Irish woman afterward. In Masquerade, authors Mark M. Hull and Vera Moynes tell James's story as it unfolds against the backdrop of the most important events of the twentieth century. James's life--both real and imagined--makes for an incredible but true story. By altering her identity to suit the situation, James manipulated almost everyone she encountered: the German intelligence service, the Nazi propaganda broadcasting service, British intelligence, and various Irish cultural groups. She was in a liaison with Irish writer Francis Stuart and, with him, provided a voice for Nazi radio programs aimed at neutral Ireland, served as the pseudo-Irish expert for German espionage missions, and participated in the failed, almost comical effort to recruit Irish prisoners of war to join the Nazis against Great Britain--quite a series of performances, considering her only contact with Ireland had been a weeklong visit in 1937. Immediately after the war, James was wanted by British intelligence as a "renegade" (traitor), but her case was quickly squelched by the British government. Drawing on an assumed wartime persona, she became fluent in Irish Gaelic and organized a number of conferences for which she won grants from the Irish government. James garnered wider attention in 1992 with her autobiography, published in Gaelic, in which she claimed that the Holocaust was a myth--a belief she maintained until her death in 2013. In documenting James's life of deception, Hull and Moynes masterfully analyze how an intellectually gifted child turned traitor to her country and convincingly rebranded herself as an Irish patriot and intellectual, while denying historical reality. The story of Rosaleen James reminds us that reality may be much less--or more--than what meets the eye and ear.