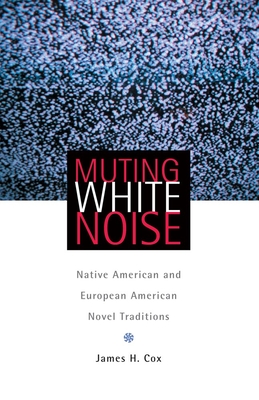 Native American fiction writers have confronted Euro-American narratives about Indians and the colonial world those narratives help create. These Native authors offer stories in which Indians remake this colonial world by resisting conquest and assimilation, sustaining their cultures and communities, and surviving.

In Muting White Noise, James H. Cox considers how Native authors have liberated our imaginations from colonial narratives. Cox takes his title from Sherman Alexie, for whom the white noise of a television set represents the white mass-produced culture that mutes American Indian voices. Cox foregrounds the work of Native intellectuals in his readings of the American Indian novel tradition. He thereby develops a critical perspective from which to re-see the role played by the Euro-American novel tradition in justifying and enabling colonialism.

By examining novels by Native authors-especially Thomas King, Gerald Vizenor, and Alexie-Cox shows how these writers challenge and revise colonizers' tales about Indians. He then offers "red readings" of some revered Euro-American novels, including Herman Melville's Moby-Dick, and shows that until quite recently, even those non-Native storytellers who sympathized with Indians could imagine only their vanishing by story's end.

Muting White Noise breaks new ground in literary criticism. It stands with Native authors in their struggle to reclaim their own narrative space and tell stories that empower and nurture, rather than undermine and erase, American Indians and their communities.