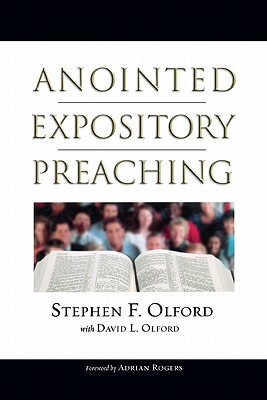 What is “expository preaching?” In this brilliant new book, Dr. Stephen Olford and Dr. David Olford, both widely respected preachers in their own right define “expository preaching” (“exposing Scripture instead of imposing upon it”), teach its technique, and express its significance (“all true preaching is expository”).

This book equips and encourages preachers of all kinds to respect their calling and minister God’s inerrant Word by the Olford’s marvelous methods.

David Olford is chairman of the board and president of Olford Ministries International and holds the Stephen Olford Chair of Preaching, named in his late father's honor, at Union University in Memphis, Tennessee. His books include The Secret of Soul Winning and Find Us Faithful: Leadership that Leaves a Legacy. He and his wife have two children.

Stephen Olford (1918 - 2004) was an internationally known minister, born in Zambia and serving churches in England and the United States. Often called the preacher's preacher, he influenced countless lives and pioneered the Encounter radio program and Olford Ministries International, both of which continue today.