This Narrow Space: A Pediatric Oncologist, His Jewish, Muslim, and Christian Patients, and a Hospital in Jerusalem (Hardcover) 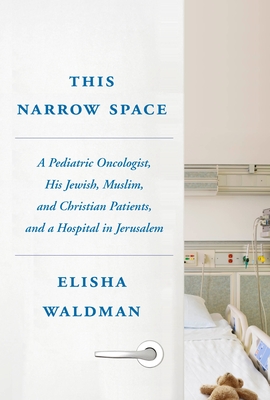 A memoir both bittersweet and inspiring by an American pediatric oncologist who spent seven years in Jerusalem treating children—Israeli Jews, Muslims, and Christians, and Palestinian Arabs from the West Bank and Gaza—who had all been diagnosed with cancer.

In 2007, Elisha Waldman, a New York–based doctor in his mid-thirties, was offered his dream job: attending physician at Jerusalem’s Hadassah Medical Center. He had gone to medical school in Israel and spent time there as a teenager; now he was going to give something back to the land he loved. But in the wake of a financial crisis at the hospital, Waldman, with considerable regret, left Hadassah in 2014 and returned to the United States. This Narrow Space is his poignant memoir of seven years that were filled with a deep sense of accomplishment but also with frustration when regional politics got in the way of his patients’ care, and with tension over the fine line he had to walk when the religious traditions of some of his patients’ families made it difficult for him to give those children the care he felt they deserved. Navigating the baffling Israeli bureaucracy, the ever-present threat of full-scale war, and the cultural clashes that sometimes spilled into his clinic, Waldman learned to be content with small victories: a young patient whose disease went into remission, brokenhearted parents whose final hours with their child were made meaningful and comforting.

Waldman also struggled with his own questions of identity and belief, and with the intractable conflict between Israelis and Palestinians that had become a fact of his daily life. What he learned about himself, about the complex country that he was now a part of, and about the brave and endearing children he cared for—whether they were from Rehavia, Me’ah She’arim, Ramallah, or Gaza City—will move and challenge readers everywhere.

ELISHA WALDMAN is associate chief, division of pediatric palliative care, at the Ann and Robert H. Lurie Children's Hospital of Chicago. He was formerly medical director of pediatric palliative care at the Morgan Stanley Children's Hospital at Columbia University Medical Center in New York. He received his BA from Yale University and his medical degree from the Sackler School of Medicine in Tel Aviv. He also trained at Mount Sinai Medical Center and Memorial Sloan Kettering Cancer Center in New York, and at Boston Children’s Hospital. His writing has appeared in Bellevue Literary Review, The Hill, The Washington Post, The New York Times, and Time. He lives in Chicago.

"A fantastic book. . . . Waldman exhibits a rare self-awareness [and] shows great honesty. [His book] illustrates just how difficult it is to reconcile devotion to the healing mission with the realities of a complex life."
—Uzodinma Iweala, The New York Times Book Review

“Waldman writes beautiful sentences and explains the intricacies of disease in ways an ordinary reader can understand. . . . Ultimately, he manages to find hope and meaning in very difficult situations.”
—Sandee Brawarsky, The Jewish Week

“[Waldman’s book is] heart-rending when he details [what] his young cancer patients face, uplifting when he achieves even small breakthroughs and makes a difference in their care, and inspirational when he writes of his own search for spirituality. . . . We empathize with his frustrations and admire his determination.”
—Chicago Jewish Star

“In his engrossing debut memoir, an American pediatric oncologist faces medical, personal, and cultural challenges during seven years as attending physician at Jerusalem’s Hadassah Medical Center. . . . Besides offering warm portraits of the children he treated and their distraught families, Waldman chronicles his transformation from a somewhat naïve, underprepared physician to one more politically and culturally astute. A candid and revealing portrait of a man and a nation in turmoil.”
—Kirkus Reviews

“Who could imagine that a book about pediatric oncology would be an absolutely engrossing page-turner? Waldman’s experiences working with children and families facing the most intricately complicated illnesses in the most intricately complicated city become a template for probing the ambiguities of life, medicine, religion, politics, and identity. This Narrow Space exudes a generosity of spirit as expansive as the Judean Hills in which it is set. Truly a book for our times.”
—Dr. Danielle Ofri, author of What Patients Say, What Doctors Hear

“This Narrow Space ushers in a new and important voice in the literature of medicine. Waldman, caring for children with life-threatening diseases, shows that even when hope is gone for the body, there is still hope for the spirit. This book will illuminate and inspire, as a young physician transits culture and beliefs in his search for meaning in some of life’s most trying circumstances.”
—Dr. Jerome Groopman, professor, Harvard Medical School, and author of The Anatomy of Hope: How People Prevail in the Face of Illness