Baby Bear, Baby Bear, What Do You See? (Brown Bear and Friends) (Board book) 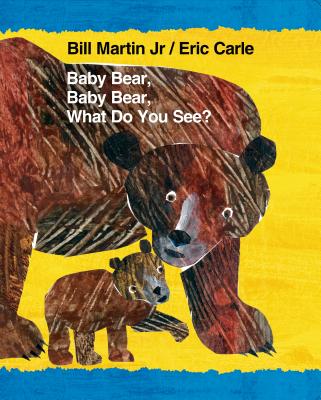 Baby Bear, Baby Bear, What Do You See? is the final collaboration from the bestselling author-illustrator team of Bill Martin, Jr., and Eric Carle. Young readers will enjoy Baby Bear's quest to find Mama, and they'll revel in identifying each of the native North American animals that appear along the way. The central focus on the special bond between mother and child makes a fitting finale to a beloved series.

These groundbreaking picture books have been teaching children to read for over forty years, and their consistently strong sales prove their staying power and continued applicability for today's kids.

Bill Martin, Jr. (1916-2004) was an elementary-school principal, teacher, writer, and poet. His more than 300 books, among them the bestselling classics Brown Bear, Brown Bear, What Do You See?; Polar Bear, Polar Bear, What Do You Hear?; Panda Bear, Panda Bear, What Do You See?; and Chicka Chicka Boom Boom, are a testament to his ability to speak directly to children. Martin held a doctoral degree in early childhood education. Born in Kansas, he worked as an elementary-school principal in Chicago before moving to New York City, where he worked in publishing developing innovative reading programs for schools. After several years, he devoted himself full-time to writing his children’s books. He lived in New York until 1993, when he moved to Texas. He lived in the east Texas woods, near the town of Commerce, until he passed away in 2004.

Eric Carle (1929-2021) was one of America’s leading children’s book illustrators and authors. Author of more than seventy books, his picture book career started when Bill Martin Jr invited him to create the illustrations for Brown Bear, Brown Bear, What Do You See? That book that went on to sell millions of copies worldwide and Eric soon began writing and illustrating his own books, eventually creating the bestselling classic The Very Hungry Caterpillar. Born in the United States, Eric also spent many of his early years in Germany where he studied typography and graphic art at the Academy of Applied Art in Stuttgart.

Carle was the recipient of many honors including the American Library Association’s Children’s Literature Legacy Award and the Original Art Lifetime Achievement Award from the Society of Illustrators. In addition to writing and illustrating books of his own, he also collaborated on several others, including Bill Martin Jr's Polar Bear, Polar Bear, What Do You Hear?, Isaac Bashevis Singer’s Why Noah Chose the Dove, and the Eric Carle and Friends’ What’s Your Favorite picture book series. The Eric Carle Museum of Picture Book Art, which Carle and his wife Bobbie founded, opened in Amherst, Massachusetts in 2002.

“The elegant balance of art, text, emotion and exposition is a Martin and Carle hallmark; they have crafted a lovely finale to an enduring series.” —Publishers Weekly, starred review

“A winning formula for keying new and pre-readers into colors, sequences and nature.” —Kirkus Reviews