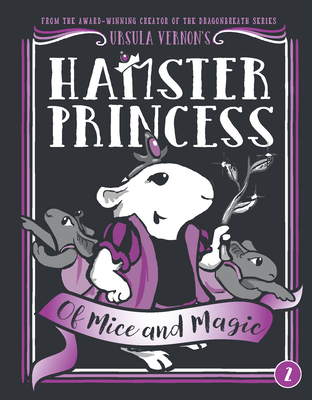 This is book number 2 in the Hamster Princess series.

Princess Harriet is nobody’s hamster damsel in distress! Book two of this series for Babymouse and Princess in Black fans is filled with even more action and twisted fairy tale fun

Princess Harriet has absolutely no interest in brushing her hair, singing duets with woodland animals, or any other typical princess activities. So when a fairy tells a very bored Harriet about twelve mice princesses who are cursed to dance all night long, she happily accepts the quest and sets off with a poncho of invisibility and her trusty battle quail. But when she arrives at the Mouse Kingdom, she discovers there's more to the curse than meets the eye, and trying to help is dangerous business . . . even for a tough princess like Harriet.

Ursula Vernon is a full-time author and illustrator whose work has won a Hugo Award and been nominated for an Eisner. She loves birding, gardening, and spunky heroines, and thinks she would make a terrible princess. Ursula lives with her husband in Pittsboro, North Carolina.

Praise for Hamster Princess: Of Mice and Magic:

* "Maintaining a keen balance between silly and sly, this sequel will have readers snickering."  —Kirkus Reviews,starred review

* "A quick and satisfying read that is as hilarious as it is fun. Make room on the shelves for this not so frilly princess."  —School Library Journal, starred review

"Spunky Harriet is just as wonderful as she was in her debut...Fans of twisted feminist fairy tales will be delighted, and Harriet’s existing followers won’t be disappointed with this second installment. Bring on book three!"—Booklist