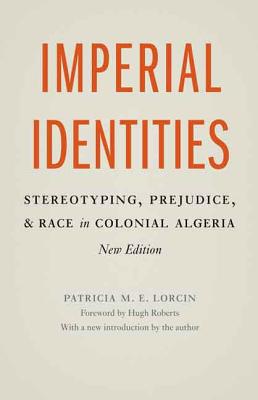 Imperial Identities is a groundbreaking book that addresses identity formation in colonial Algeria of two predominant ethnicities and analyzes French attitudes in the context of nineteenth-century ideologies. Patricia M. E. Lorcin explores the process through which ethnic categories and cultural distinctions were developed and used as instruments of social control in colonial society. She examines the circumstances that gave rise to and the influences that shaped the colonial images of “good” Kabyle and “bad” Arab (usually referred to as the Kabyle myth) in Algeria.

In this new edition of Imperial Identities, Lorcin addresses the related scholarship that has appeared since the book’s original publication, looks at postindependence issues relevant to the Arab/Berber question, and discusses the developments in Algeria and France connected to Arab/Berber politics, including the 1980 Berber Spring and the 1992–2002 civil war. The new edition also contains a full and updated bibliography.

Patricia M. E. Lorcin is a professor of history at the University of Minnesota and the author of numerous books, including Historicizing Colonial Nostalgia, Algeria and France 1800–2000, and France and Its Spaces of War.

Hugh Roberts is the Edward Keller Professor of North African and Middle Eastern History at Tufts University and the author of Berber Government: The Kabyle Polity in Pre-Colonial Algeria.

"[Imperial Identities] is essential reading for any student of Maghreb history and important in its conclusions. . . . Lorcin's sources are rich and varied, scrupulously referenced. . . . Enjoyable to read as well as being most enlightening."--Anthony Clayton, Journal of Imperial and Commonwealth History

“Lorcin’s study of the formulation and manipulation of imperial identities is a masterpiece of the genre and makes a significant contribution to Algerian history, to nineteenth-century French intellectual history, and to the broader history of imperialism.”—John Ruedy, Journal of Middle East Studies

“Sets new standards for research in both colonial and intellectual history. . . . Imperial Identities would already be important if it merely showed how the Kabyle Myth came into existence, but that is not where Lorcin stops her inquiry, and this is why her work is certain to leave a lasting mark on the field.”—James Le Sueur, Journal of Modern History

"Lorcin's persuasive and well-written account of the historical development of [postcolonial] attitudes adds much to our understanding."--William A. Hoisington Jr., Journal of Interdisciplinary History