Edison and the Electric Chair: A Story of Light and Death (Paperback) 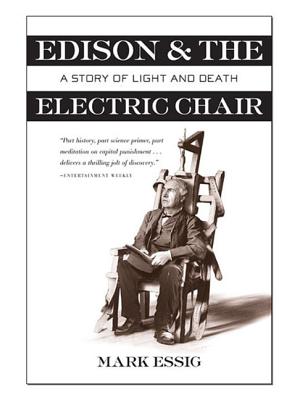 Thomas Edison stunned America in 1879 by unveiling a world-changing invention--the light bulb--and then launching the electrification of America's cities. A decade later, despite having been an avowed opponent of the death penalty, Edison threw his laboratory resources and reputation behind the creation of a very different sort of device--the electric chair. Deftly exploring this startling chapter in American history, Edison & the Electric Chair delivers both a vivid portrait of a nation on the cusp of modernity and a provocative new examination of Edison himself.

Edison championed the electric chair for reasons that remain controversial to this day. Was Edison genuinely concerned about the suffering of the condemned? Was he waging a campaign to smear his rival George Westinghouse's alternating current and boost his own system? Or was he warning the public of real dangers posed by the high-voltage alternating wires that looped above hundreds of America's streets? Plumbing the fascinating history of electricity, Mark Essig explores America's love of technology and its fascination with violent death, capturing an era when the public was mesmerized and terrified by an invisible force that produced blazing light, powered streetcars, carried telephone conversations--and killed.

Mark Essig earned a doctorate in American history from Cornell University. A native of St. Louis, he now lives in Los Angeles. This is his first book.

“A thoroughly modern view of Edison, removed from his pedestal.” —The Washington Post Book World

“. . steeped in historical scholarship and written with sober elegance.” —Newsday