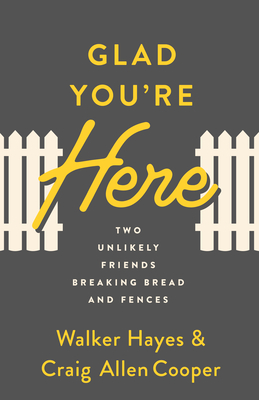 When Craig Cooper and Walker Hayes met, Walker was an alcoholic atheist reeling from the backlash of a failed music career. Through their unlikely friendship, Craig’s life demonstrated the love of Christ in a way that shattered Walker’s misconceptions of Christianity, ultimately leading him down the path to a dramatic conversion. The two are now close as brothers, choosing to be next-door neighbors and ripped out the fence between their homes as a testament to the power of the gospel to break down barriers and unite people together in Christ. Glad You’re Here helps us discover how building relationships, sacrificing for the good of others, and drawing near in times of need can lead to powerful transformation. Through story and biblical reflections, Glad You’re Here helps readers see how God works in the everyday lives of those who love him.

WALKER HAYES is a Grammy nominated singer/songwriter originally from Mobile, Alabama, signed to Monument Records. Throughout his career, he has released multi-Platinum singles "Fancy Like" and "You Broke Up With Me," performed on national television with Good Morning America, Late Night with Seth Meyers, The Tonight Show Starring Jimmy Fallon, and The TODAY Show, and has been written about in the LA Times, Esquire, Billboard and Rolling Stone. His single "Craig" -- a song about a neighbor who reached out to Hayes in a time of need -- was nominated for Song of the Year at the 2018 AIMP Nashville Awards and prompted Hayes to start the Be a Craig Fund to help other families during their own times of need. A new version of the track featuring MercyMe is on Hayes' forthcoming album Country Stuff the Album. The song inspired this book.

CRAIG COOPER is a gifted storyteller and Bible teacher. For over twenty years, he has spoken at numerous churches, men's retreats, college campuses, and various gatherings. He has traveled across North America, South America, Europe, Africa, and Asia with a desire to see and serve the world. An encourager at heart, Craig's passion is to help people perceive the gifts of God in their lives and deploy them for Jesus' glory. Having served as one of the founding pastors of Redeeming Grace Church in Franklin, Tennessee, Craig now resides in the greater Nashville area with his amazing wife, Laura, and their four kids as next-door neighbors to the Hayes family. You can follow Craig on Instagram @craigallencooper and for more information or for speaking inquiries, please visit craigallencooper.com.