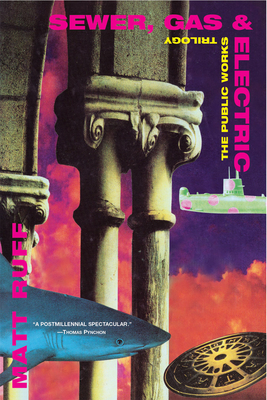 High above Manhattan android and human steelworkers are constructing a new Tower of Babel for billionaire Harry Gant, as a monument to humanity's power to dream. In the festering sewers below a darker game is afoot: a Wall Street takeover artist has been murdered, and Gant's crusading ex-wife, Joan Fine, has been hired to find out why. The year is 2023, and Ayn Rand has been resurrected and bottled in a hurricane lamp to serve as Joan's assistant; an eco-terrorist named Philo Dufrense travels in a pink-and-green submarine designed by Howard Hughes; a Volkswagen Beetle is possessed by the spirit of Abbey Hoffman; Meisterbrau, a mutant great white shark, is running loose in the sewers beneath Times Square; and a one-armed 181-year-old Civil War veteran joins Joan and Ayn in their quest for the truth. All of whom, and many more besides, are caught up in a vast conspiracy involving Walt Disney, J. Edgar Hoover, and a mob of homicidal robots.