The Devil Is Here in These Hills: West Virginia's Coal Miners and Their Battle for Freedom (Paperback) 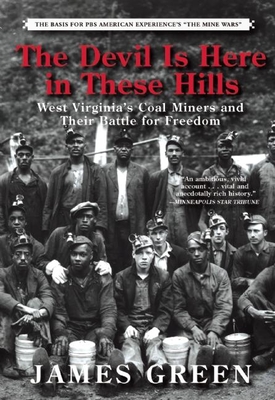 From before the dawn of the twentieth century until the arrival of the New Deal, one of the most protracted and deadly labor struggles in American history was waged in West Virginia. On one side were powerful corporations and industrialists whose millions bought political influence and armed guards for their company towns. On the other side were 50,000 mine workers, the nation's largest labor union, and the legendary "miners' angel," Mother Jones. Attempts to unionize were met with stiff resistance. Fundamental rights were bent, then broken, and the violence evolved from bloody skirmishes to open armed conflict. The fight for civil rights and unionization in West Virginia verged on civil war and stretched from the creeks and hollows to the courts and the U.S. Senate. In The Devil Is Here in These Hills, celebrated labor historian James Green tells this story like never before.

James Green is the author of five books, including the critically acclaimed Death in the Haymarket: A Story of Chicago, the First Labor Movement and the Bombing that Divided Gilded Age America. Green received his PhD in history from Yale University and is a professor of history emeritus at the University of Massachusetts, Boston. He lives in Somerville, Massachusetts.